Facing at least another three weeks without inspirational captain and lock Brodie Retallick, the Chiefs head to Dunedin at the weekend to play the Highlanders with an urgent need to address their poor starts to Investec Super Rugby games.

Retallick is likely to be out for another three weeks due to a torn ligament in his wrist while flanker Sam Cane was likely to also be three weeks away from his return for the first time this year after his neck surgery.

QUICK TAP: CRUSADERS CALL IN SCRUM NOUS FOR SHARKS
Cooper said the most disappointing aspect of the 19-47 loss they suffered to the Hurricanes had been the start; they were down 17 points in 20 minutes and that had resulted from soft tries taken by the Hurricanes after tackles that should have been made were missed.

"We've had bad starts against the Sunwolves, the Lions, and we're trying to address why we're starting so poorly. The boys came back to 19-28 and we were attacking and we turned the ball over and they did an Ardie Savea run up the sideline and scored a fantastic try, so that was the disappointing factor," he said.

The side had been improving since their poor start to the season and he felt a factor in Wellington may have been the result of losing halfback Brad Weber and wing Sean Wainui, both of whom were good communicators in the side. They were hard to replace, especially so late in the week.

To celebrate the re-signing of Sam Whitelock until 2023, we take you back to this ripper of a try he scored for @crusadersrugby in 2015! pic.twitter.com/oTAI5d0Srw— Super Rugby (@SuperRugbyNZ) April 30, 2019

It was a case of players retaining and building their confidence and with that their communication ability would improve. It was something that took time, he said.

With key leaders in the side like Retallick being out, Weber had became a key point in that area and he was also still a young man who was also learning the communication required between forwards and backs.

"Webby's playing really well there and that's why he was given the captaincy when Michael Allardice was out," he said.

"It's an unforgiving stage and our back three have changed completely and they're the main communicators in how we defend so we just need to build those guys and give them confidence," he said.

PICK YOUR FORM XV | It's time for YOU to be the selector and pick your form #SuperRugbyXV! ???? 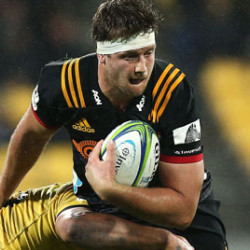