Playing as if they were at the peak of their game rather than sitting at the bottom of the New Zealand Investec Super Rugby Conference, the Chiefs ran riot at Loftus Versfeld on Sunday (NZT) to claim a record-breaking 56-20 win over the Bulls.

Not only was it the first win for the Chiefs in Pretoria since 2001, it was also their highest win over the Bulls - their 36-point margin beating the 33-point margin achieved in 2000.

QUICK TAP: WARATAHS STUN THE CRUSADERS IN SYDNEY
It was difficult to believe that the Bulls side on show was leading the South African Conference. They were hesitant, rarely able to breach the solid Chiefs' defensive line and skittery with ball handling.

They were also guilty of basic off-side play which was eventually penalised to help the remarkable possession and territory rates the Chiefs enjoyed. Coupled with an inability to reduce the tempo at which the Chiefs played, especially in clearing ball from the breakdown, they faced a tough day on defence.

Up front, the Chiefs pack, solid at the scrum and competitive at the lineout, made light of the vaunted home side and yielded nothing in a display which merely confirmed captain and lock Brodie Retallick's stature in the world game, with great support from prop Angus Ta'avao both in the scrum and around the field, which was maintained by Nepo Laulala when he replaced him.

Retallick scored two tries within two minutes, either side of the halftime break, both of them capitalising on outstanding forward drive, in close contact for the first but skilled ball handling in the second. He could have completed a hat-trick but off-loaded to replacement halfback Te Toiroa Tahuriorangi to score.

Luke Jacobson's rising status was evident in his play in the loose where No.8 Tyler Ardron was also in the thick of ball carrying.

But the magic that fullback Damian McKenzie can inject into any side made the afternoon miserable for the home defences as he unleashed clever passes, astute tactical kicks and kept the home side guessing. Returning wing Solomon Alaimalo benefitted from the passing game to score two tries, his day blighted only by a sin-binning for a high tackle.

Second five-eighths Alex Nankiville belied his belated call-up to play instead of Anton Lienert-Brown with a controlled game, and his second try was down to following through on a McKenzie grubber kick to the in-goal. Earlier, replacement first five-eighths Marty McKenzie's pass on the ground was picked up for Nankiville to run through to score.

While the Bulls scored two tries they were consolation efforts and they never threatened the Chiefs. First five-eighths Handre Pollard was shut out of the game while No.8s Duane Vermeulen and Schalk Brits were unable to have any impact on the ball.

FT | @ChiefsRugby have thumped the Bulls in Pretoria! Is this the turning point in the Chiefs season? ??#BULvCHI #RaiseTheStakes pic.twitter.com/9IDhtzyjMB— Super Rugby (@SuperRugbyNZ) March 23, 2019 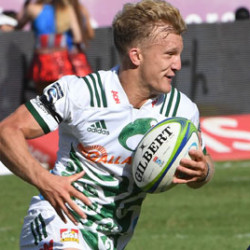