The Black Ferns have opened their defence of the Laurie O’Reilly Memorial Trophy with a comfortable 47-10 victory over the Australian Wallaroos at Perth’s Optus Stadium.

The eight tries to two victory was not perfect, but there was plenty to show that they will be even better next weekend in the second Test. They are now 18-0 over the Wallaroos dating back to 1994.

Australian talked a good game beforehand and brought physicality at various times, but missed 19 first half tackles alone and had a misfiring lineout. The inexperienced left wing Lori Cramer was, however, full of running and deserved her double.

The Black Ferns led by 22-0 at the halftime break, kicking things off with a try to McMenamin off a lineout drive. Her bust led to the second try, to Wickliffe, in the corner. There were three slick passes off second phase, though coach Glenn Moore was not satisfied with some of the overall passing and alignment and delivered that message at the break. It was Wickliffe’s 21st try in 40 Tests.

She returned the favour to her No 8 with a superb break straight up the middle of the park to set in train the movement that led to McMenamin’s second try.

When first five Ruahei Demant scored a brilliant solo try, exposing some weak Wallaroos defence, it was 22-0 and the contest seemed as a good as over just before oranges,

The Wallaroos tried valiantly to stay in the fight, scoring twice through Cramer, the first an opportunist 80m effort.

At 30-10 with 11 minutes to play, the Wallaroos harboured hopes of substantially closing the gap, but the visitors closed with three fine tries.

Elder, who was industrious and effective all day, latched onto an intercept and ran 40m for the score. Leti-I’iga finally found some reward for her try, and replacement loose forward Joanah Ngan-Woo plunged over from a pick and go to put an exclamation mark on this Black Ferns’ performance.

There was time later in the game for the Black Ferns to hand debuts to replacements, centre Kilisitina Moata’ane and prop Olivia Ward-Duin.

“We asked a lot of the team after the Super Series. We played clinically at the start, which helped open things up at the end,” said Elder.

Both sides will clash again next Saturday at Auckland’s Eden Park before the All Blacks and Wallabies Bledisloe II. Kickoff is at 5pm.

FT | The Black Ferns draw first blood in the Laurie O'Reilly Memorial Trophy! Defeating the @WallaroosRugby in Perth. Thanks for the match Australia & we'll see you in Auckland next weekend. #AUSvNZL pic.twitter.com/FKA6hv24sz— Black Ferns (@BlackFerns) August 10, 2019 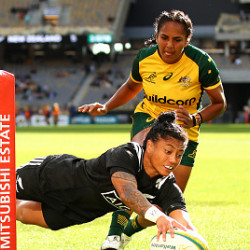