I can’t believe we are already approaching our ninth week of Investec Super Rugby action.
As we all know it’s a huge year ahead with the World Cup putting pressure on players to perform. I imagine it’s also been pretty challenging for coaches to manage the compulsory rest that All Blacks players have had to take in the opening weeks.
I reckon we’ve seen some quality rugby so far this season, the Crusaders and Hurricanes have been playing some good rugby. It was a difficult start for the Chiefs, Highlanders and Blues, but the Blues have started to come right, winning their last four games on the trot. The Chiefs have bounced back as well so there is some good competition going on in that New Zealand conference.

There are a few players who have impressed me so far this season. Will Jordan from the Crusaders – his pace and footwork create real trouble for the opposition. Reiko Ioane and Tom Robinson out of the Blues. Robinson is everywhere on the park and his work rate is outstanding, also Ardie Savea has been on fire for the Hurricanes. But I’ve been most impressed with Crusaders outside back George Bridge. I’d be stoked to see him go to Japan later this year.

There seems to be a lot of noise around Ma’a Nonu and whether he should be in the All Blacks mix for the World Cup. Obviously, he’s a great player and he’s been impressive for the Blues the last couple of weeks. But he has a lot of quality competition ahead of him. If there are injuries in the midfield though, and they needed to call upon someone, I wouldn’t rule him out.
Speaking of the Blues, it really looks like the new management and Leon McDonald have come in and started to make some good gains. They’ve got good players and to have someone like Sonny Bill Williams start on the bench and then come on shows they have a bit of depth. I’d like to see Ma’a Nonu and Sonny Bill Williams together in the midfield at some stage.

We’ve got two exciting local derbies this weekend, with the Crusaders taking on the Highlanders in Christchurch and the Blues travelling down the line to Hamilton to face the Chiefs. I can’t look past the Crusaders on Friday night, I think they’ll be too good for the Highlanders who have been hit by a number of injuries. And I reckon the Chiefs will have the edge over the Blues at home.

I’m looking forward to seeing how those two matches play out, although I’m not sure how much Super Rugby I’ll be able to watch this weekend, because I’ll be at the Black Ferns training camp in Christchurch. We haven’t had a camp in the South Island since 2017, so it will be great to gather as a group there this weekend and it gives some of the community coaches a chance to come and have a look.

There is so much to look forward to and celebrate in women's rugby in 2019!

We’ll be training at Lincoln University and on Sunday we’ll be having a training game with the wider squad on Field 1, from 10am. Everyone is welcome to come down and watch. It will be a great opportunity for people to see some of the best players in the world in action. We’d love to see you there. 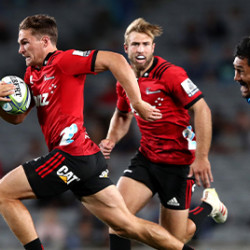 View all
Black Ferns named for Rugby World Cup opener
The Black Ferns team to play in their opening match of Rugby World Cup 2021, in front of a record-breaking crowd, has been named.
Referees confirmed for November internationals
Australian referee Nic Berry has been appointed to the England-New Zealand Test at Twickenham on November 19 during the All Blacks northern tour.
Popular Katia brings up century in the Bush
When Inia Katia arrived in Masterton from Fiji more than a decade ago he had little idea he'd emulate his future father in law by playing 100 games for Wairarapa Bush.
Tuitupou hattrick helps sink Lions Under 19
New Zealand Under 19 team have finished their tour of South Africa undefeated after a comprehensive 42-10 victory over the Lions Under 19 side at Emirates Airline Park Stadium, in Johannesburg.
England women draw inspiration from football team
England is the red-hot favourite to win the Women's Rugby World Cup starting in Auckland on Saturday and is drawing inspiration from their football team, who won Euro 2022 earlier this year.
New Zealand Under 19 named for final game in South Africa
The New Zealand Under 19 team has been named to take on the Lions Under 19 side at Emirates Airline Park Stadium in Johannesburg.
Are the days of stifling rush defences limited in rugby?
Encouraging signs have emerged in the early stages of England's Premiership.
Wallaroos undaunted by ‘world record’ Eden Park crowd
Wallaroos captain Shannon Parry is undaunted at taking on the Black Ferns in front of a world-record crowd, at Eden Park, in Saturday's Women's Rugby World Cup pool opener.
Black Ferns In World Cup Openers
The Rugby World Cup starts on Saturday when the Black Ferns tackle Australia at Eden Park.
Jordie Barrett commits to NZR and Hurricanes till the end of 2025
Jordie Barrett has officially put pen-to-paper on a new deal that will keep him in the capital with the Hurricanes and New Zealand Rugby (NZR) through till the end of 2025.
Victoria Grant has Aupiki and the World Cup on her mind
Victoria Grant was a winner throughout her distinguished playing career. The former Black Ferns captain won the World Cup in 2006 and 2010 and was recognised as New Zealand Women's Player of the Year in 2008.
Pollard rates the All Blacks World Cup chances
Support for New Zealand's Rugby World Cup hopes in France next year has come from an unlikely quarter – Springboks' first five-eighths Handré Pollard.
History awaits the Black Ferns at Eden Park
Black Ferns co-captain and first five-eighths Ruahei Demant believes Saturday's Rugby World Cup opening game against Australia will result in emotions she has never experienced before.
LADI6 set to light up Whangārei as part of huge opening weekend
Premier New Zealand female vocalist Ladi6 has been announced to headline match day two of Rugby World Cup 2021 at Northland Events Centre on Sunday 9 October.
Quarterfinalists confirmed in the Bunnings NPC
Canterbury finished as the highest-placed side, losing only once during the competition, while scoring 46 competition points to head the Evens Conference and will host Northland who stormed home against Manawatū with a 41-24 win in Kaikohe.
Playoff picture becomes clearer in Heartland Championship
Bunnings Colin Meads Memorial Trophy semifinalists look set to be South Canterbury, Whanganui, Thames Valley and North Otago with one round of the competition left.
New Zealand Under 19 team edge plucky Leopards
The New Zealand Under 19s (NZ U19s) have made it three from three on their tour of South Africa with a hard fought 42-31 victory over the Leopards in Potchefstroom.
Fa'amausili to be inducted into Hall of Fame
Four-time Women's World Cup winner with the Black Ferns, Fiao'o Fa'amausili, will be inducted into World Rugby's Hall of Fame in November.
Theresa Fitzpatrick thriving on World Cup opportunity
Theresa Fitzpatrick missed the Sevens World Cup in South Africa in September - a major disappointment for an Olympic and Commonwealth Games gold medalist.
It all comes down to the final round of the Bunnings NPC
It all comes down to the final round of the regular season with playoff spots yet to be decided in both the Odds and Evens conference of the Bunnings NPC.