Conrad Smith preparing for next phase of career Conrad Smith has begun his career in coaching, only seven weeks after playing his last game of professional rugby.

Smith, who played 94 Tests at centre for the All Blacks, 43 games for Wellington, 126 games for the Hurricanes and 52 for Pau, has joined the coaching staff of his French club Pau, where former All Blacks Colin Slade, Tom Taylor, Frank Halai, Jamie Mackintosh and Benson Stanley are in the club squad.

QUICK TAP: INVESTEC SUPER RUGBY ROUND 17 REVIEW
Smith told French rugby newspaper Midi Olympique that as soon as he had played his last game he cut off the weight training but was still running because he enjoyed that.

"I always like to run and even if I stop the rugby I am still very active," he said.

Smith said during his off season he had reflected on what he wanted to do and had discussions with players and other coaches in Europe and New Zealand and opted for the defence coaching role with the club.

"I have been thinking about what we can change, what other teams are doing well, what we can imitate, or adapt, to suit us. In rugby there is never only one way to do things. A defensive system may suit one team but not another and because of that it is important to observe, understand and adapt," he said.

Smith added that there was still plenty to learn about the game he had graced.

"During my career I've always played the same position, without really being interested in the forwards but now I have to take account of all the parameters.

"I have to accept the fact that I still don't know a lot about rugby and that I will compensate for this by talking with players and coaches. Of course, I also hope that my playing experience will be a help, but I know perfectly well that good players do not necessarily become good coaches."

Smith said learning coaching took time and his transformation would not be immediate.

"It's like when you become a player, there are a lot of things to learn and it takes time."

But the role would involve stress of a different kind to that when playing. As a coach it was hard to control the game as was possible when playing.

He had been analysing and comparing defensive systems his club struck.

"We made progress compared to our previous season by conceding fewer points and tries. But at the same time there is a lot we could improve.

His view of his role was that defence was based on structure and a team approach but the base relied on the technical quality of individuals.

"This is something that I learned in New Zealand where the individual technique is really important and where we are in the habit of saying the devil is in the detail," he said.

He will also be using his French to get the message across.

"I want to coach in French. It is necessary to do that. It is important to me to speak the local language. We are a French club and I want to speak French," he said.

Club coach, and former All Black, Simon Mannix said while the club would lose a player they would welcome his contribution to the coaching panel which also includes Smith's 2007 World Cup team-mate Carl Hayman.

"His strictness and his knowledge of the game would help our young players.

"For the past three years, he has been very involved in the club's progression. He will be missed on the field because he is irreplaceable but he will bring us a lot technically. I'm looking forward to having him on our staff and I am sure he will develop into a great coach," Mannix said. 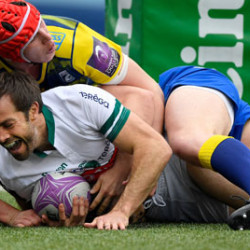