Conrad to have baby, Wallabies to get Malakai The All Blacks will field an intimidating midfield with Highlanders centre Malakai Fekitoa moving into the staring team replacing veteran Conrad Smith, who has returned home with his wife expecting.

Mrs Smith wasn’t due for a couple of weeks to give birth to the couple’s first child but an early morning phone call led to coach Steve Hansen and the 77-Test centre frantically organising travel.

The news was confirmed on the All Blacks official twitter account direct from team camp late this morning.

While the All Blacks didn’t rule out a potential return for Smith, they did note it was unlikely.

"Lee's been due to have a baby in a couple of week's time but it looks like she's going to come a little bit early," Hansen said to stuff.co.nz

"Hopefully everything goes well, and if it goes really well he could possibly be back. We're not holding our breath on that."

It will potentially rob the World Champions of some defensive nous and the longest standing centre partnership in All Blacks history, but will certainly add some punch with the inclusion of Fekitoa resulting in a 208kg battlecruiser midfield.

Crusaders back Ryan Crotty moves onto the reserves.

The All Blacks match day squad is otherwise unchanged.

The revised team is: 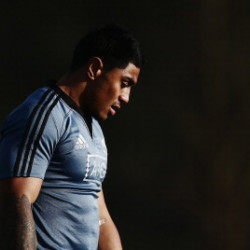