The New Zealand Heartland XV have kicked off their campaign with a convincing 60–0 win over the Vanua XV from Fiji in Taupo yesterday evening.

QUICK TAP: ALL BLACKS TEAM NAMED FOR JAPAN TEST
Captain Alex Bradley led the way scoring his first of a hat-trick of tries early in the first half and adding real impetus to the Heartland attack with a number of strong carries.
Second five-eighths Sione Holani also stood out in the first half, with a scything run setting up halfback Willie Wright, who ran a great line to dot down under the posts for the second.
After Bradley’s second try, it was the centre Peni Nabainivalu who rounded out the half after being on the end of a sweeping move down the righthand flank. First five-eighth James Lash added the conversion to bring the score to 29–0 at halftime.
Turning to face the wind in the second spell, the Heartland XV were prepared to defend and while the Vanua attack would at times threaten, their inability to maintain possession meant it was the Heartland XV that had more opportunities to show their attacking pedigree.

NEWS | Congratulations to Horowhenua-Kapiti for taking out the Lochore Cup on Sunday with a 26 - 23 win over Wairarapa Bush. Check out all the highlights and match report here ??

Nabainavalu was again on the scoresheet after a deft chip and chase landed the ball in his hands and he just had to fall over the line to claim his second.
Fresh from leading Thames Valley to the Meads Cup title on Saturday, Bradley showed no sign of fatigue as he ran a great angle on a speculating pass out wide, to trot in his third underneath the posts.
He was subbed soon after as coach Craig Scanlon started ringing the changes with an eye ahead to the game against New Zealand Marist on Sunday.
Bradley’s Thames Valley team mate, Glen McIntyre burrowed his way over after a sustained attack with the Heartland scrum dominating the Fijians.
Craig Clare, who organised play well all night from fullback, ran in one of his own, with his Wanganui team mate Campbell Hart also getting on the score sheet. Lash added to his total of six conversions and a penalty for a personal haul of 15 points in what were very challenging kicking conditions.
The New Zealand Heartland XV now turn their attention to New Zealand Marist and the defence of the McRae Cup on Sunday. A thrilling come-from-behind victory in 2017 has seen the Heartland XV defend the Cup for six consecutive defences.
New Zealand Heartland XV (Alex Bradley 3, Peni Nabainivalu 2, Willie Wright, Glen McIntyre, Craig Clare, Campbell Hart tries, James Lash 6 con, 1 pen)
Vanua Fiji XV 0 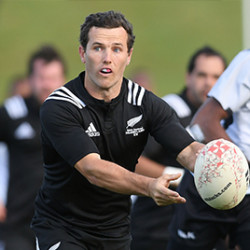