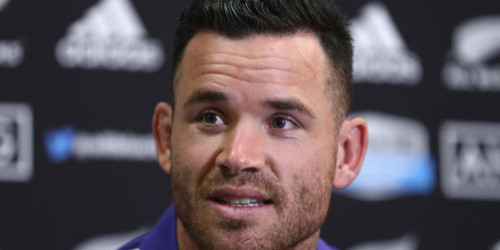 Crusaders centurion and 44-Test All Black Ryan Crotty has announced he will leave New Zealand rugby at the end of the year, and link up with Japanese club Kubota Spears.

The long-serving Crusaders midfielder confirmed the news on Monday evening in Christchurch.

QUICK TAP: SUPER RUGBY REVIEW - ROUND SEVEN
"The All Blacks, Crusaders and Canterbury rugby have been such an important part of my life and I'm grateful for every opportunity I've had to represent my country, my province and my family over the years," Crotty said.

"I'm a proud Cantabrian and Christchurch will always be home, but I'm really looking forward to taking on a new challenge in the Top League as part of the Kubota Spears club. I know I'll look back at the end of my career in New Zealand with really fond memories of the experiences I've had and what I've achieved alongside my good mates, but for now my focus is enjoying the season ahead and helping to lead this Crusaders side one last time in 2019."

Crotty progressed through the Canterbury and Crusaders development programmes, making his debut for Canterbury back in 2008 and accumulating 67 provincial caps to date. He became Crusader No. 134 in his Investec Super Rugby debut against the Hurricanes in Christchurch the following year.

The 30-year-old currently has 142 Super Rugby caps to his name, having made his 100th appearance in the Crusaders' 2016 win over the Jaguares at home. Alongside Matt Todd, he has been vice-captain of the sides that won consecutive Super Rugby titles in the 2017 and 2018 seasons.

BREAKING | 82 test All Black Aaron Smith has re-signed with New Zealand Rugby through to 2021. We're thrilled that you're staying in New Zealand Aaron! ??????

BNZ Crusaders Head Coach Scott Robertson said: "2019 is Crotts' eleventh season with the Crusaders, which is indicative of his loyalty. He's a local boy, who has made an immense contribution to rugby in this region over an extended period of time and we're really proud of him.

"Crotts is an outstanding leader in our backline and has delivered consistent performances in our midfield for more than a decade. We're fortunate to have one more season with him in 2019 and an opportunity to tick off more important milestones before he departs for Japan," Robertson said.
Crotty made his All Blacks debut against the Wallabies in Sydney in 2013, and has earned 44 caps in the black jersey to date, scoring nine tries.

All Blacks Head Coach Steve Hansen said: "Crotts has been one of the mainstays of our midfield for many years and is a world-class footballer. He's a very physical, well-balanced rugby player, an outstanding communicator and decision-maker, who runs great lines and has a great pass. He's been a real asset to the All Blacks, Crusaders and Canterbury and will leave New Zealand rugby at the end of the season with our very best wishes."

Canterbury Head Coach Joe Maddock said: "Crotts is a proud member of New Brighton Rugby Club, having worked his way up through the grades here in Christchurch. I'm sure I speak on behalf of all Canterbury fans when I thank Crotts for his commitment to red and black rugby over the years, and congratulate him on all he has gone on to achieve at Super Rugby and international level."
A former member of the Shirley Boys' High School First XV, Crotty represented New Zealand Schools in 2006, New Zealand Under 19 in 2007 and was part of the New Zealand Under 20 side that won the inaugural Junior World Championship in 2008.

BREAKING NEWS | Hollywood stars @TheRock and Jason Momoa have swapped movie scripts for mouth guards in a shock move to sign with @NZRugby. 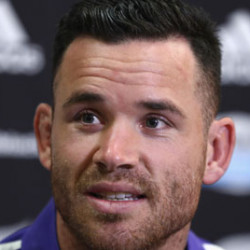 View all
Satisfied All Blacks look to build on opening win
Satisfaction at getting over their first Rugby World Cup hurdle with their 23-13 win over South Africa was obvious from the All Blacks camp after the game in Yokohama.
All Blacks turn kicking pressure back on Springboks for win
Applying the tactic of hitting their opponent at their supposed point of strength, their kicking game, the All Blacks broke the shackles South Africa had applied in recent games to claim a 23-13 win in their Rugby World Cup pool opener in Yokohama on Saturday.

Canterbury reclaim Farah Palmer Cup lead
Canterbury moved back to the top of the points table in the Farah Palmer Cup when beating Manawatu 54-7 on Saturday.
Official All Blacks Store opens in Christchurch
New Zealand Rugby has opened the doors to an Official All Blacks Store at Christchurch Airport.
Loose forward contrasts could hold key to win in Yokohama
A clash of styles in the loose forwards may be the difference in Saturday's All Blacks-Springboks Rugby World Cup pool opener in Yokohama on Saturday.

Regaining respect of All Blacks boosts Boks
Regaining the respect of the All Blacks had the Springboks in a good place as they prepare for their opening pool game at the Rugby World Cup game in Yokohama on Saturday.
Zinzan Brooke: World Cup set for blockbuster opening weekend
Both the All Blacks and Springboks have gone with very strong sides for tonight’s Rugby World Cup clash.
PREVIEW: All Blacks vs South Africa (Yokohama)
The eyes of the rugby world will turn to Yokohama International Stadium on Saturday night (NZT) as the All Blacks and South Africa meet in a blockbuster Pool B clash.
Unique bond to be tested in World Cup opener - Kayes
Ahead of their opening Rugby World Cup clash in Yokohama, Jim Kayes takes a look at the rich rivalry between the All Blacks and South Africa.
Farah Palmer Cup: Week 4 preview and team lists
We’re already at the halfway point of the season for the Championship teams and it’s getting tight in the Premiership competition. Canterbury are back in action after their bye week and the JJ Stewart Trophy goes on the line again.
Players get tackle height message - Scott Barrett
All Blacks lock Scott Barrett said he had been working hard on his defensive techniques in the wake of his red card in the first Bledisloe Cup Test against Australia and was confident he was ready for the World Cup opener against South Africa on Saturday.
World Cup reality hits home for Crusaders trio
All Blacks first five-eighths Richie Mo'unga wondered if he would be part of the Rugby World Cup campaign when injuring his shoulder in the Bledisloe Cup game in Auckland last month but was relieved to be set to play South Africa in Yokohama on Saturday.
Another challenge for All Blacks' pack
Having been under pressure to turn on a pressure performance in their second Bledisloe Cup game against Australia in Auckland last month, the All Blacks pack was facing the same demand in their Rugby World Cup opener against South Africa in Yokohama on Saturday.
Intensity of World Cup opener is what rugby, and coaching, is all about
It may be All Blacks coach Steve Hansen's fifth Rugby World Cup but he admitted attending World Cups was still the highlight of his career and he was excited heading into Saturday's pool opener against South Africa in Yokohama.
All Blacks team named for World Cup opener
The All Blacks team to play South Africa in their opening Rugby World Cup Test on Saturday September 21 at International Stadium, Yokohama has been named (Kick off: 6.45PM, 9.45PM NZT)
Juggling rugby and cricket an exciting challenge for Thamsyn Newton
Rugby has played a huge part in the life of Wellington Pride fullback Thamsyn Newton.
Erasmus knows all to well about the All Blacks-Springboks rivalry
Springboks coach Rassie Erasmus knows all about the rivalry with the All Blacks from the sharp end, playing against the long-time rivals
South Africa defence coach wary of All Blacks' system
Springbok defence coach Jacques Nienaber has spent a fair amount of time analysing All Blacks methodology over recent years and believes he understands what the team management are trying to do to break down defensive screens.
South Africa name team to face All Blacks
South Africa have named an unchanged side to the one that defeated Japan two weeks ago to face the All Blacks in the opening Pool B clash of the Rugby World Cup.
It’s on all of us to create something tribal around the FPC and women’s rugby
Wellington’s had some wingers over time. In fact, New Zealand Rugby has been blessed with audacious talent on the flanks year after year, seemingly since the dawn of time. We, New Zealand, and they, Wellington, have another.