Crusaders get boost from Whitelock, Crotty Looking to get back into winning form the Crusaders have welcomed back captain and lock Sam Whitelock and vice-captain Ryan Crotty for Friday's game with the Bulls in Christchurch.

Both came through their final concussion protocol checks this week and were feeling fine, Crusaders coach Scott Robertson said.

Consecutive losses to the Hurricanes and Highlanders, both of them away games, had put extra pressure on the side when meeting the Bulls.

Robertson said there had been a lot of attention to detail in their reviewing and making sure there was no glossing over where they needed to be better.

. @crusadersrugby look to get back to winning ways when they host the Bulls this Friday night, and Wyatt Crockett can't wait to see you there!


"It's my job as head coach to make sure we get everything in the next game to perform and get a result. Nothing definitely has been glossed over and there was a little bit of edge at training so it's expectations that come with the jersey and we have to drive that ourselves," he said.

However, they will be without Matt Todd who suffered a rib injury in the last moments of the Highlanders game and with the short turnaround there wasn't the time for him to fully recover. Lock Luke Romano missed out with Sam Whitelock's return and with Quinten Strange having played well it was a good chance for Romano to freshen up, Robertson said.

Three-quarter Brayden Ennor was included in the reserves on the back of good performances for the Knights. He was a potential talent and his chance to make his Super debut fitted in with the rotation requirements of the side.

Robertson said he didn't want to complicate things for Ennor. He was a very good rugby player and speed was his greatest asset, while he could play centre and wing, and fullback at a push, and he could also read a game and Robertson wanted him to play, react and use those strengths.

Loose forward Tom Sanders had also shown he was ready to step up from the Knights and while having 20 Super Rugby appearances for the Chiefs, he is set to make his Crusaders debut.

Beware @crusadersrugby! The Bulls have brought their attacking A-Game to NZ! Get down to AMI Stadium this Friday to see if the reigning champions can get back to their winning ways!


Loose forward Heiden Bedwell-Curtis said the effort had been there against the Highlanders but a few errors in key moments, and a couple of situations where things didn't go their way had not helped.

"We've just got to look at ourselves and nail the final details in our game plan," he said.

The Bulls were a side who liked to run the ball and they had some speedsters outside and first five-eighths Handre Pollard was controlling the game well.

With their big men liking to run with the ball the challenge was ahead for the Crusaders to cope with that.

No originally in the squad, Bedwell-Curtis has been a key contributor to the side through the early stages.

"I'm just taking my opportunities as they come. I wasn't named in the squad and was a bit gutted and felt sorry for myself for a few weeks then Razor gave me the call and said, 'We've got a few injuries we want you down here', and I was more than happy to come in and carry on with Super Rugby.

"It's been great and I've just been relishing the opportunity," he said.

With several blockbuster clashes in Round 5 of #SuperRugby, which NZ team do YOU think scored the best try?

Brodie Retallick for the Chiefs
George Bridge for the Crusaders
Elliot Dixon for the Highlanders
Bryn Hall for the Crusaders
Michael Collins for the Blues#DontMissAThing pic.twitter.com/SDiEoE1oWE— Super Rugby (@SuperRugbyNZ) March 18, 2018 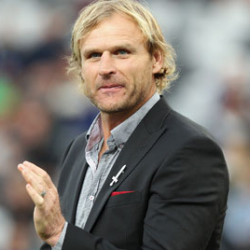