Winning the tightest of Investec Super Rugby semifinals 30-26 over a Hurricanes team who refused to lie down, the Crusaders won the right to play and win their third consecutive final against the Jaguares in Christchurch next week.

This was a gargantuan struggle where the defending champions were made to work their hardest, especially against a Hurricanes side who transformed themselves in the second half to give themselves every chance of one of the great Super Rugby upsets.

QUICK TAP: JAGUARES MARCH INTO HISTORIC FINAL
A lucky call when a knock-on by captain and lock Sam Whitelock went undetected and was called against Hurricanes halfback TJ Perenara instead, an unfortunate end to what was an outstanding performance from him, saw the Crusaders win the final scrum to claim the game.

One of the most keenly-awaited contests was between the five-eighths, Richie Mo'unga for the Crusaders and Beauden Barrett for the visitors. They didn't disappoint with Mo'unga displaying his usual running flair, and kicking tactically, and at goal, with superb accuracy.

Barrett, in the second half especially, was the complete general taking the ball to the line, significantly in lead-up plays to two of their tries and taking his own chances to run with the ball.

Both sides could take plenty of positives out of the performance but the Crusaders will relish such a tight game to aid their preparation for the clash with the Jaguares.

No.8 Kieran Read and flanker Matt Todd had big nights in defence while rival flankers Ardie Savea and Reed Prince and No.8 Gareth Evans gave them plenty of competition. Wing Sevu Reece had few chances for the Crusaders but scored two fine tries, and second five-eighths Ngani Laumape responded in kind for the Hurricanes.

Wing George Bridge's ability to contest halfback Bryn Hall's box kicks produced the first try when he got up to secure the ball. The ball was moved quickly for second five-eighths Ryan Crotty to use wide open spaces on the right flank.

He directed a kick towards the corner and that was an uncontested invitation for Reece to enjoy all the time in the world to pick up the ball at speed and get across in the corner, 12 minutes into the game.

Having kicked away a lot of their possession, and given themselves plenty of subsequent tackling, the Hurricanes finally got themselves into a position of advantage just before halftime. Although they almost lost the opportunity.

From the lineout, Beauden Barrett kicked a short kick intended for Laumape, but it was Mo'unga who ran onto the ball and kicked it back into the Hurricanes' half. However, fullback Jordie Barrett was back in cover and beat the tackles of Mo'unga and Reece to head deep back into the Crusaders half.


Regaining the ball from the ruck Laumape charged ahead and hooker Dane Coles and Beauden Barrett both helped carry the ball to the Crusaders' line. Playing under advantage, the Hurricanes threw the ball back to the left and it was Laumape who stepped back inside the defence to score on the halftime hooter.

It took the Hurricanes only 52 seconds of the second half to remind the Crusaders they were still in the game. Beauden Barrett took the ball to the line, drawing three defenders, and then slipped the ball to centre Matt Proctor, a late inclusion to the side, who was running on the slightest of tangents and found wide open real estate as he tracked back out.

Tackled short of the line, the ruck was set and Perenara worked the blind to slip a back-of-the-hand pass to wing Ben Lam who was untroubled to score.

It was a short-lived advantage as from the restart the Crusaders recovered the ball and Mo'unga decided to chip a kick ahead into no-man's land. The Hurricanes couldn't grasp the ball and it was Reece who swept in, picked it up and passed infield to Mo'unga who ran in the try.

A thumping midfield tackle on centre Jack Goodhue by Coles saw the ball fall loose in the 50th minute and Laumape raced through to kick it on, played the ball off his chest and regathered to secure the ball and score his second try.

Ringing their changes with substitutes brought an immediate reward in the 57th minute when from a lineout the Crusaders worked the ball to Mo'unga who went back out, and then the play went to midfield where No.8 Kieran Read, Matt Todd and replacement Jordan Taufua, who only been on the field for seconds, set the ball up for replacement centre Braydon Ennor who flung a long ball to Reece.

His speed beat Beauden Barrett's tackle in the corner.

The Crusaders knocked the ball on at the restart and under advantage the Hurricanes stormed ahead, Beauden Barrett twice took the ball to the line and the impetus resulted in a strong run by Coles which saw replacement prop Ben May carried it forward. Then from the ruck, Perenara sold an outrageous dummy and sniped over the line for the try. 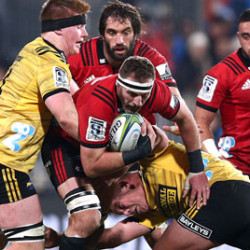