Respect for, and wariness of, the danger the Hurricanes could pose if given the opportunity was on the minds of the Crusaders leading into the weekend's Investec Super Rugby semifinal.

Crusaders assistant coach, and former Ireland and British & Irish Lions international Ronan O'Gara said the side never took winning for granted and they focused on preparing the areas of their game that they could control in order to be ready for the Hurricanes' challenge.

QUICK TAP: HURRICANES KEEPING THEIR EYE ON THE PRIZE
"We're under no illusions of the task facing us on Saturday night," he said.

"The Hurricanes are really interesting because they have strengths all over the place, they have such talented individuals that you give them time and space and you're going to be under your posts. That's what happens in Super Rugby especially in conditions like we had today [Tuesday].

"But if you come to winter rugby there will be a different set of questions asked of us. They've such quality all around the park you would be foolish to focus on one or two [players], because if you do that they will rip you somewhere else," he said.

The Hurricanes had many fine traits, and a really smart coaching team and his good mate Jason Holland was part of that and he would have them firing, he said.

O'Gara said he hadn't paid any attention to the much touted clash of five-eighths between Richie Mo'unga and Beauden Barrett and that was down to his role being involved with the global vision of the backline and getting the best out of the unit.

Can anyone guess what year this match was? We'll give you a hint, it was a semifinal... ?????#HURvCRU pic.twitter.com/kxGxIvkUc5— Super Rugby (@SuperRugbyNZ) June 25, 2019


"I've been a big admirer of Beauden Barrett and have been for a long time, a fantastic player, a competitor," he said.

His and halfback TJ Perenara's feat in playing 100 games together was impressive and it was something that was difficult to achieve. That gave them experience over the Crusaders in those positions but the Crusaders had two halfbacks in Bryn Hall and Mitch Drummond who were playing well while Mo'unga was 'on top of his game'.

Barrett had an advantage in being a superstar at Test level but if Mo'unga could get the right space it would make for an exciting game, he said.

The ability to contain Barrett's threat came down to winning the battle up front.

"If you win collisions, if you win the gain line, no matter how good you are as a 10 [first five-eighths], your time is diminished significantly. And our boys have done a great job in that regard in previous campaigns.

"But when the ball is in Beauden Barrett's hands, it's not a good sign for any opposition," he said.
O'Gara said one of the qualities the Crusaders enjoyed was their consistency, it was a strength and an asset. The week was carefully thought out and carefully planned.

Recalling previous finals campaigns was not a consideration, they were focused on this week and excited by the challenge the Hurricanes represented.

"It offers a great opportunity to get to a final and in that regard it's about how we perform for 80 minutes on Saturday and that's our key focus," he said.

The Hurricanes were in the finals because they were a consistently good side and their forwards had been performing to allow them to do that.

"They make a lot of teams up front suffer so they'll be looking to have their say in the game," he said.

But for the Crusaders coaching team, it was all about getting the players into a place where they were enjoying their rugby and that was something coach Scott Robertson had been doing all season.

"This is what we all live for, finals footy. I think when you're involved in rugby for a long time the rest of the months drag a bit but this is what really excites us no more so than this club.

"There's lot of champion mindsets here with Kieran Read and Sam Whitelock, so that's a big advantage for us," O'Gara said.

2?0?1?6? THROWBACK | Who remembers when the @Hurricanesrugby put 35 points on the @crusadersrugby in Christchurch? Can the Canes put out another performance like this on Saturday? 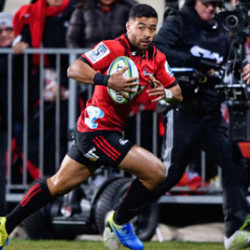