Two penalty tries conceded by the Blues proved the difference as the Crusaders claimed a 24-22 win in an epic start to their respective Investec Super Rugby campaigns at Eden Park on Saturday night.

Both sides produced some superb running tries, none better than the post-halftime breakout scored by one of the key Blues performers of the night No.8 Akira Ioane. But it was Crusaders wing Manasa Mataele, whose two tries resulted from some impressive lead-up work on both occasions, who punished the home side.

The Blues weren't without chances of claiming a win, replacement first five-eighths Harry Plummer missing a conversion attempt that would have drawn the game and a later penalty goal, from 46m, that would have won it. But the blame didn't lie with him, rather it was the pressure play with the penalty tries that was the ultimate difference

QUICK TAP: GRIT AND GUTS DO IT FOR HIGHLANDERSTypical of the Crusaders' ability to apply defensive pressure in the face of the Blues efforts to run ball during the first quarter was their one chance taken courtesy of outstanding centre Braydon Ennor, who sliced through the Blues defence and fed wing George Bridge down the left flank. It took a fine covering by Melani Nanai to rein him in.

However, the Crusaders maintained the pressure in the 22m and when halfback Bryn Hall aimed a crossfield kick to the right, Blues fullback Michael Collins was stretched and unable to secure the ball with wing Manasa Mataele on hand to score.

Making use of a mis-directed Otere Black cross-kick, the Crusaders turned the ball back on the Blues with prop Joe Moody making a strong run. As they used a rolling lineout maul to effect, Blues blindside flanker Tom Robinson entered from the side and referee Nick Briant ruled a penalty try and sent Robinson to the sin-bin for his pains.

Having been denied a try before halftime when No.8 Akira Ioane was ruled to be held up over the line, the Blues came out firing and following a storming midfield burst by prop Alex Hodgman the Blues came alive.

Crusaders flanker Jordan Taufua knocked a ball on out in the open and the Blues swooped with lock and skipper Patrick Tuipulotu tidying and linking with Ioane while Nanai swept the ball through his hands to Collins on the flank. He made ground and found Tuipulotu inside him who then transferred to the flying Ioane who had too much speed on for the Crusaders defence to deny him.

After a series of scrums five metres out from the line, Ioane went hard off the back of the scrum and then Tuipolotu drove at the line. The ball was quickly recycled and it was replacement prop Ofa Tu'ungafasi who went to the line on his back but still had the wherewithal to place the ball to score.

Typically, the Crusaders responded with haste. From a scrum on the Blues' 10m line halfback Bryn Hall ran wide and had Bridge running in from the blind wing into wide open space. He moved across field and flung a long pass to Mataele who scored.

Scrum power after captain and flanker Matt Todd had been short of the line resulted in Briant awarding a second penalty try against the Blues for a scrum being pulled down.

However, the Crusaders lost replacement hooker Ben Funnell was sin-binned for a ruck offence and the Blues made the most of it, using the lineout to set up their own charges at the line and after strong surges by replacement hooker Matt Moulds and prop Karl Tu'inukuafe it was Augustine Pulu who dived over the ruck to score. 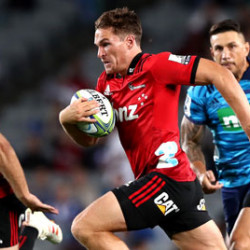