All the virtues that have made the Crusaders such an uncompromising opponent, not least at playoffs time, were in evidence when turning back the Sharks 40–10 at AMI Stadium in Christchurch on Saturday.

The win set up a semi-final against the Hurricanes in Christchurch next weekend.

Stung by the scrum penalty try they conceded a week earlier to the Blues, the Crusaders pack demonstrated from the outset they were not going to concede a centimetre to the Sharks who had openly stated they wanted to take advantage of the perceived weakness.

QUICK TAP: HURRICANES CAN STILL GET BETTER - BOYDThe Sharks did enjoy possession and position statistics that would normally have yielded more opportunities, but to do that they needed to breach the Crusaders' determined defence and they only managed that once.

With No.8 Kieran Read showing the value of experience in his distribution in link play, and flanker Matt Todd, having a significant game in the loose while locks Sam Whitelock and Scott Barrett were consistent in support play, the Crusaders provided a foundation that allowed the backs to shine at key moments.

The Crusaders also benefited from a sharp start to the game, scoring two tries in the space of three minutes.

Quick thinking at a lineout by the Crusaders caught the Sharks napping eight minutes into the game. They claimed the ball and moved it to second five-eighths Ryan Crotty. Aware his marker Andre Esterhuizen had moved up quickly, Crotty held the ball, beat the tackle and then passed out to fullback David Havili, who in turn released wing George Bridge down the sideline.

Halfback Bryn Hall was in support for Bridge's inpass and ran in the try.

Moments later at a lineout just inside their half, Read stole the ball and Hall threw long where flanker Jordan Taufua found Crotty, who sliced through again to give Havili the opportunity to again score in the corner.

Refusing to be panicked into responding with anything other than caution, the Sharks rebuilt their game through field position, attempting to put their lineout drive into effect. They blew one try scoring chance when flanker Philip van der Walt dropped the ball with the line open to him.

But it was when attempting to create a play off the back of the scrum that Read made a mistake. He looked to pass to Bridge on the blindside only to see the ball picked off by wing Kobus van Wyk.

The Sharks mounted their assault through their big ball runners and when the ball was released it was van Wyk across on the left side of the field who had the freedom to run in for the try after 25 minutes.

Having been on the defensive for much of the remainder of the half, the Crusaders broke out just before halftime but all they could claim was a penalty goal after an early tackle was made on Havili.

Then returning from the break, Bridge made use of a big hole that opened after a lineout to charge into space to take play to the Sharks' line. From a ruck Hall sniped around the side and got the ball away to Todd to score a minute into the second half.

Just before they entered the final quarter, the Sharks mounted a 17-phase assault in a bid to close the 16-point margin down. But they couldn't find a breach and, typically, the Crusaders broke out with Mo'unga and Read combining sharp hands to give replacement wing Braydon Ennor a chance to unleash his speed while running in a try.

Then, Todd made a quick kick ahead from a penalty, regathered the ball and put Whitelock into open space. Sensing he didn't have the legs to go 50m he passed to replacement halfback Mitch Drummond who then passed out to replacement flanker Pete Samu for the final try.

The final scoreboard was harsh on the Sharks and wasn't representative of their effort but they needed to be more precise with their chances because the mood of the Crusaders was unforgiving. 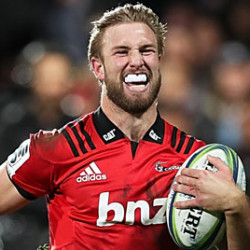