Superior tactical acumen, patience and discipline were sufficient for the Crusaders to maintain their dominance over the Blues in the last 10 years when claiming a 19-11 Investec Super Rugby win in Christchurch on Saturday.

By contrast, the Blues went for long periods without possession, or field position, but closed in on the Crusaders in the last 10 minutes, only to highlight their night where unnecessary penalties allowed home five-eighths Richie Mo'unga to keep the scoreboard ticking over while landing four penalty goals.

Wet conditions, the result of heavy dew, saw the Crusaders look to a kicking game in the first half, making 19 kicks to 12 by the Blues and 42-30 by the end of the game. The attempted short kicks by Mo'unga, second five-eighths Ryan Crotty and centre Jack Goodhue, were of varying quality but they kept the pressure on the Blues defence.

By the end of the night there was only one tackle between them with the Crusaders making 85 tackles. The breakdowns were also even but the Crusaders won 12 penalties to eight and that represented the difference between the sides.

A mistake by Blues first five-eighths Harry Plummer provided the Crusaders their first chance. His attempted box kick went directly into touch. From the lineout, Mo'unga lobbed a kick in behind the Blues backs and Crotty raced through to claim the ball and feed halfback Bryn Hall inside him giving him a free run in for the opening try in the 19th minute.

The kicking game continued into the second half, the Crusaders having more success with the length they could achieve while the Blues were continually on the defensive.

Typical of their success was a long kick made downfield by halfback Jonathan Ruru. Crusaders fullback David Havili put it high and the ball was regained quickly on halfway by wing George Bridge and Hall was able to lob another kick ahead.

From that Mo'unga went close to stealing a 49th minute try when following up the kick. Running down the blindside, Mo'unga picked the ball out of the air ahead of Plummer and looked goalline bound but was taken in a tackle by fullback Melani Nanai, who was the best performed of the Blues backs on the night, and he lost control of the ball just short of the line.

The Blues got closer when Plummer landed a 57th minute penalty goal but almost immediately the three points were returned when Mo'unga landed his third penalty goal.

Chances for the Blues were few and far between and typical of their night was a lineout heading into the final quarter where they had one of their best positions in the game only to lose the ball in the post-lineout set-up.

Soon after a promising blindside move saw wing Rieko Ioane create room on the outside but the pass to Nanai was just behind him and lost forward.

But in the 70th minute, they did better from a second lineout penalty and while it took some crucial tidying up by prop Alex Hodgman to set up a maul which allowed quick clearance with fast hands from TJ Faiane and Nanai giving Ioane the space on the left to score.

At a time when discipline was vital, Hodgman infringed with a lineout push and Mo'unga did the rest to land the goal and deny the Blues a bonus point. 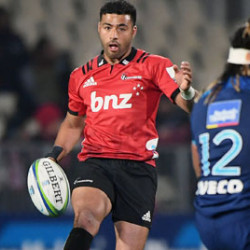