Crusaders warm up for playoffs in style A pre-playoffs revision class set the Crusaders up for a 54-17 win over the Blues in the last round of Investec Super Rugby preliminary round play at AMI Stadium in Christchurch on Saturday.

Crossing for their first try in the third minute when centre Jack Goodhue was given space by fullback Israel Dagg, the Crusaders revealed their depth of patience as the Blues enjoyed a dominance of field position but were unable to capitalise as much as they wanted or needed.

QUICK TAP: NAHOLO CLASS ROLLS REBELS IN DUNEDIN
That was demonstrated at one stage when the Blues threw 21 phases at the Crusaders only to turn over the ball, see the ball moved downfield and within moments wing George Bridge was punishing the Blues with a 22nd minute try.

More hard work by the Blues was again negated just before halftime when prop Michael Alalaatoa drove strongly and set up ball which the Crusaders moved as halfback Mitch Drummond broke, looked to pass, only to have the ball knocked back by Reiko Ioane for Drummond to reclaim and still have the presence of mind to find wing Seta Tamanivalu who scored beneath the posts.

To compound the situation the pre-break try was followed by another three minutes into the second half when Goodhue ran onto a perfect pass, at the precise angle, from Mo'unga to take them out to 26-5.

Having scored themselves courtesy of an intercept of a Dagg pass by Melani Nanai in the 30th minute, the Blues enjoyed a surge of scoring in the middle stages of the second half when a strong scrum on the Crusaders' line yielded a penalty try in the 51st minute.

Three minutes later Nanai was in again with a spectacular dive in the corner but the closeness of the score at 26-17, merely stoked the Crusader fires. They finished apace running in two more tries to Bridge and one each to lock Sam Whitelock and replacement halfback Bryn Hall.

It was typically clinical play, forcing the errors as the Blues threw caution to the wind while the Blues were as unable to make a prolonged impact on the game, before silly errors in decision-making, especially in passing ball on when it needed to be held, or better choices made.

A horrific injury toll the side endued throughout the season was seen again when they lost wing Caleb Clarke to injury in the 20th minute which resulted in a reshuffled backline with Stephen Perofeta moving to fullback and Bryn Gatland moving into first five-eighths. Then prop Isa Tuungafasi suffered a head knock and failed an HIA test.

It was a disappointing end to a frustrating season for the side and not the most fitting of farewell performances for the departing Jerome Kaino, the second most capped Blues player who completed 139 games for the side.

For the Crusaders it was a useful romp, with all bench players gaining valuable time ahead of the playoffs and Bridge, through his hat-trick of tries, moving to a share of second place on the try scoring list across the competition.

The Blues may not have been the most formidable opposition the Crusaders have faced but the way the defending champions went about their business suggests it is going to take a supreme performance to deny them the honours again.

FT | @crusadersrugby finish their 2018 #SuperRugby regular season in style with a thumping win over the Blues. How can they be stopped in the playoffs?#CRUvBLU pic.twitter.com/fOeM0KI08Y— Super Rugby (@SuperRugbyNZ) July 14, 2018 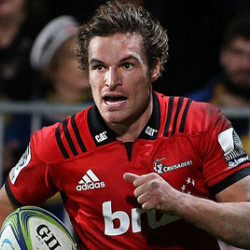