New Zealand's Blacks Ferns Sevens confirmed not only their dominance of the 2018-19 HSBC Women's Seven Series but the game overall when completing a 34-10 demolition of Australia in the Sydney final on Sunday.

It completed a series sweep, of the last three events of last season's series and the first three of this season, on top of their Sevens Women's World Cup and the Commonwealth Games Sevens victories, to cap an unbeaten 12 months. One more win would seal the series for another year.

QUICK TAP: WOMEN IN RUGBY MAKING AN IMPACTTheir last loss was the Sydney Sevens tournament at the same time last year when they fell to Australia. The win was also the first time the Black Ferns had won the Australia leg of the series.

Captain Sarah Hirini said the side played 'amazingly well' throughout the tournament but it was always hard to go to Sydney to play a tough Australian side.

She said in spite of the success the side had achieved the motivation to succeed came from within and they didn't like to lose.

"I hope we're getting better. We want to take women's sevens to the next level," she said.

As per tradition, the #BlackFerns7s celebrate winning a Cup Final with a HAKA!#Sydney7s pic.twitter.com/JADMhtaDdQ— Black Ferns (@BlackFerns) February 3, 2019


It was a smartly worked lineout move by Hirini and Stacey Waaka that finally put paid to any chance of an Australian comeback. Hirini took the ball, came back to ground and slipped the ball to fellow lineout participant Waaka, instead of passing back to the halfback sweeper. It caught the Australians napping and Waaka was unchallenged on her run to the goalline.

Earlier, Waaka had opened the scoring after lay up work between Michaela Blyde and Niall Williams. Australia levelled the scored when Emma Sykes chipped behind the New Zealand defence, got the bounce and scored.

But New Zealand came back after Australia lost their skipper to the sin-bin and Ruby Tui and Gayle Broughton moved the ball to give Shakira Baker a clear run at the line.

Hirini and Tui made good ground after the halftime hooter sounded and it was Blyde who ran in a try to give New Zealand a 17-5 lead at the turn.


Blyde was back in the action after Australia botched an early chance and with the outsides screaming for the ball it was moved quickly and Blyde, cutting back on a slight angle broke three tackles and ran in her second. Sykes scored a second try for Australia in response and then after Waaka's second try, an intercept ball was moved quickly for Blyde to complete a hat-trick.

New Zealand qualified for the final with a 29-0 win over the United States earlier in the day.
Denying the United States possession throughout the first half the Black Ferns showed great patience, even when on the back foot to work the ball to position and when the break came it was Williams taking advantage of Waaka's strong run down the right flank. With the USA committing several players to the breakdown the defences were down and by taking a gap at speed Williams was able to give Blyde a clear run at the line.

Tui had an outstanding first half at the breakdown and it was her wrestling seizure of the ball that created a chance for Waaka again and while tackled she found Tui looping around outside her to take the pass to score the second try.

As she had through the tournament, Gayle Broughton came on and offered immediate variation in the midfield and she whipped through a gap and scored to take New Zealand to a 19-0 lead at halftime.

Needing to get some possession, and to avoid the mistakes that occurred in the first half the USA fouled immediately by kicking the restart out on the full. That gave the Black Ferns another chance and when Shakira Baker got the ball with room on the left wing she was too quick for the defence and scored.

Just before the end of the game another strong sideline burst by Waaka looked set to give her a try but the cover defence smothered her. However, Katarina Whata Simpkins came in to clear the ball from the breakdown and spotting a gap raced around the side of the ruck to score. 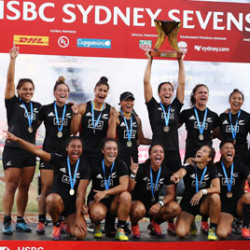