Donald answers the call for the Chiefs Answering a call again 2011 World Cup replacement Stephen Donald will turn out for the Chiefs in Investec Super Rugby again this season.

Donald was famously out whitebaiting when getting a call to join the All Blacks in the week leading up to the 2011 Rugby World Cup final in which he replaced first five-eighths Aaron Cruden to kick what proved the winning penalty goal in the 8-7 win over France at Eden Park.

QUICK TAP: BLUES ROUND OUT WARM UPS WITH A WIN
Chiefs coach Colin Cooper said after Tiaan Falcon ruptured his Achilles tendon in the first week back at training in the New Year they looked around at replacements and wanted a more experienced replacement given the younger five-eighths they have in their squad.

Donald had been keen to be involved last year but he fitted the bill perfectly for them this year.

"He'll be like another coach. We'll be managing him on the load, with his knowledge, his mana he has among the group, the passion that he has for the Chiefs again, it was a no brainer to bring him in," he said.

Cooper said the side's final warm-up game in Brisbane on Friday had involved a really young Chiefs side and in the last 20 minutes when the game was in the balance the backline was very young, probably the youngest he had been involved with.

"For them to bring it home and win the game and was pretty pleasing," he said.

Cooper said the pre-season had done its job and had given players opportunities to merit selection for the opening game.

The loss of long-time leaders in Charlie Ngatai, among the backs, and Liam Messam, in the forwards had resulted in some considerations of who might step up. In the backs Anton Lienert-Brown was an obvious player to take on more of a leadership role while in the pack he said there were a group of players ready to make the move and he was pleased with the leadership factor overall.

Lienert-Brown's All Black status was backed by his playing ability and the fact he was a quality individual and a player who communicated very well, Cooper said.

"He gives confidence to the younger guys, he's a special guy and he's still only 22. It's amazing he's been around for so long and I think he's learnt off the Charlies and the Liams and the people that have been there before him so yes, really pleased with his leadership," he said.

Prop Kane Hames was still going through concussion protocols and would not be considered this week and his was a week-by-week process.

The side had approached their pre-season differently as a result of their end-of-season review last year. They had involved more contact earlier than previously which was a medical finding after the injuries the side suffered and there had been some changes made in the coaching arrangements with the side, Cooper said.

There wouldn't be any noticeable change in the way they played the game. They had made the quarterfinals last year and the game would be similar, he said.

While Sam Cane's presence will be missed during the first half of the campaign Cooper was happy with the quality of Mitch Karpik and Lachlan Boshier and the challenge would be keeping them on the field, he said.

?? When you realise #SuperRugby kicks off this week! 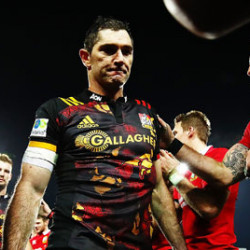