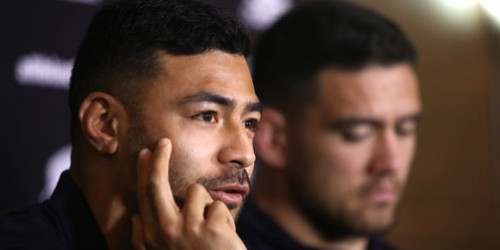 How the dual playmakers' role being developed, even under the pressure of a Bledisloe Cup playoff at Eden Park on Saturday, will look when completed is an unknown but first five-eighths Richie Mo'unga is enjoying the process.

The All Blacks-Australia game is heightened by extreme pressure: the Bledisloe Cup defence, the home record on Eden Park, the potential loss of the No.1 world ranking and the ever-present prospects of the Rugby World Cup starting next month.

QUICK TAP: CRUNCH TEST THE BEST THE ALL BLACKS COULD ASK FOR
That was all on the back of last weekend's record 26-47 loss to Australia in Perth.

Mo'unga said on Thursday that it wasn't possible to fix all the issues that were exposed in Perth and they had been working carefully through them during the week.

There was an eagerness to get out and rectify things but the important thing was channelling that to being ready at 7.35pm on Saturday and not on the Wednesday or Thursday before the game.

The continuing growth of his combination with fullback Beauden Barrett was part of the intriguing mix.

"It's not something you're really clear cut on, there's no end vision that's a perfect way of what it looks like," he said.

"I think we're still trying top figure that out and that's the beauty of having me and Beaudy on at the same time. There's different situations that happen and having two ball players on the field and two kicking options, I think that's a bonus as well.

"When we are forced to play with the ball and try to chance our arm a bit it means that Beaudy can rely on me and I can rely on him to bounce a few things off," he said.

The whole process of stepping into the first five-eighths role was a long held dream for Mo'unga.

"That's what I strive for and it's what I keep working towards so the next thing is I've been given this opportunity and it's to go out there and be me," he said.

Mo'unga said he was excited for his Crusaders teammates wings Sevu Reece and George Bridge being given starting positions.

"They are really deserving of this opportunity and I think they're going to do a great job this weekend."

Mo'unga said Reece was a witty character whose knowledge of the game could be under-estimated.

"His energy on the ball is awesome, the fact that he can turn something out of nothing is what's given him the year that he has had and he's a humble kid. He comes in and works really hard and just wants to learn.

"George Bridge is someone who time and time again just performs every week and at a high performance and as an athlete that is sometimes hard to do but he has shown he has a mature head and he is able to do his role consistently and with a lot of effort. I love that about George," he said.

?? What makes the boys stronger? Your support. Show us how you #BACKBLACK and you could win a trip to see us play live in Tokyo!

Hooker Codie Taylor, who is a substitute this week, said the forwards had kept things very simple during the week and had nailed a few things they needed to and as a whole the forward pack was excited by the challenge.
"It's going to be a cracker of a game. Most games are won up front so we've got a duty to do ther," he said.

Taylor said it wasn't only the forwards but the whole team who looked at last weekend's result and felt they had let themselves down.

"With that comes a responsibility to front up this week. If we don't do our job up front as a forward pack we don't give the opportunities to the likes of Richie and Beauds and that, to do what they can do.

"Australia, you always know they're a great team. They've got good flair, they've got a good forward pack, they're really skilful and if you don't front up and don't do a job they'll roll on top of you. As much as it hurts to say, they were more hungry than us on Saturday so we've got to be better than that this Saturday.

"As a player off the bench your job is to bring energy to the group for the boys who have been slogging it out for 40-60 minutes. We're not trying to overthink it on the bench. We get together after halftime and say what we're seeing and what we need to do to bring a bit of an edge when we come on and that's a real focus for us," he said.

Eden Park is a SELL OUT for the #BledisloeCup decider! 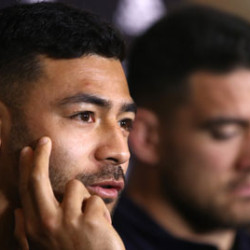 View all
Mixed fortunes for New Zealand teams on day one in Cape Town
The All Blacks Sevens have work to do if they are to make the Cape Town HSBC World Series Sevens playoffs after losing their opening game 10-14 to Spain.
All Blacks Sevens and Black Ferns Sevens teams named for Cape Town
The All Blacks Sevens and Black Ferns Sevens teams for the Cape Town leg of the World Rugby Sevens Series have been named.
Ruahei Demant and Black Ferns shine at the ASB Rugby Awards
Black Ferns co-captain and World Cup winner, Ruahei Demant has collected three major prizes at the 2022 ASB Rugby Awards, including the supreme Kelvin R. Tremain Memorial Player of the Year.
2022 in review with Kirstie Stanway and Joe Wheeler
ASB Rugby Awards show hosts Kirstie Stanway and Joe Wheeler look back on the year that was 2022.
New Zealand Under 18 Sevens teams named for World School Sevens
New Zealand Rugby announced today the selection of the New Zealand Under 18 Boys and Girls Sevens teams alongside the New Zealand Māori Under 18 Ngā Whatukura (Boys) and Ngā Māreikura (Girls) teams competing at the 2022 World School Sevens in Auckland from 17 to 18 December.
New Zealand teams out to defend their crowns in Cape Town
The All Blacks Sevens and Black Ferns Sevens will be defending their South African HSBC World Series titles in Cape Town at the weekend.
Tito joins Blues coaching ranks
Former Māori All Black and Hurricanes locking stalwart Paul Tito will be part of the Blues coaching ranks for the 2023 Super Rugby season, replacing Ben Afeaki, who has joined New York in the United States major league rugby competition.
Six great rookie seasons in Super Rugby
With an exciting batch of 21 rookies named across New Zealand’s five DHL Super Rugby Pacific squads in 2023, we look back at five great rookie seasons of the past.
History of the Tom French Memorial Cup
The Tom French Memorial Cup has been awarded annually since 1949 to the outstanding Māori player of the year.
Gatland to return as Wales coach
Warren Gatland has been granted an early release from his Chiefs contract to return to Wales as head coach in place of Wayne Pivac, who stood down after a review on Monday.
Kurt Baker signs off a decorated sevens career in Dubai
All Blacks Sevens rugby legend Kurt Baker has announced his retirement from international rugby sevens, following the All Blacks Sevens 2022 World Series tournament in Dubai.
Podium finishes for New Zealand teams in Dubai
New Zealand's Sevens sides may not have managed gold medals from the HSBC Dubai World Sevens, but they were on the podium, the Black Ferns for silver and the All Blacks Sevens for bronze.
Super Rugby Pacific locked in until 2030
Super Rugby Pacific’s future has been locked in until 2030 with New Zealand Rugby (NZR) and Rugby Australia (RA) announcing details of a new joint-venture agreement in Sydney today.
Black Ferns celebrations continue with nationwide tour
Weeks on from their historic Rugby World Cup victory in Auckland, fans across the country will have the opportunity to meet their heroes and celebrate #LikeABlackFern.
Highlanders icons return to the club
Highlanders' icons All Black Ben Smith and his co-captain in the side's 2015 Super Rugby champion win, No8 Nasi Manu, are returning to the club in management roles.
All Blacks Sevens and Black Ferns Sevens named for Dubai
The All Blacks Sevens and Black Ferns Sevens teams for the Dubai Sevens have been named.

Players to watch in Sky Super Rugby Aupiki
Sky Super Rugby Aupiki is set to explode with 105 players contracted by New Zealand Rugby (NZR) to represent the Blues, Chiefs Manawa, Hurricanes Poua, and Matatū in 2023.
World Rugby looking at innovations to ‘reimagine’ rugby
World rugby officials have taken the first steps towards 'reimagining' rugby.
All Blacks Sevens and Black Ferns Sevens set to return to Dubai
The sevens series will be in full swing in just a matter of days, with both the All Blacks Sevens and Black Ferns Sevens teams in action in Dubai.
Nominees announced for 2022 ASB Rugby Awards
New Zealand Rugby’s (NZR) top performers of 2022 will be recognised at the ASB Rugby Awards, with nominees announced today.