Electric first half sets up Chiefs win in Suva Absolute execution during a frenetic and amazing first 40 minutes saw the Chiefs claim a 45-22 Investec Super Rugby win over the Highlanders in Suva on Saturday.

Seven converted tries in the half were powered by a strong tail wind and while the Highlanders came back in the second half, there wasn't sufficient time to overcome more hurdles than in the Grand National Steeplechase.

QUICK TAP: KAINO PROVIDES INSPIRATION FOR THE BLUES
As a result the Chiefs, who were denied a try-scoring bonus point, moved one point ahead of the Highlanders on the points table.

If circumstance prevents Chiefs stalwart and No.8 Liam Messam making a more impressive valedictory performance for the side then his first 40 minutes will suffice as a demonstration of what he could do when right on his game. He covered the ground at the ANZ National Stadium like a player 10 years younger than his 34 years proving more industrious than a non-stop machine.

His efforts helped the Chiefs to a remarkable halftime score of 42-0 for what was the Highlanders' home game.

An electrifying start by the Chiefs rocked the Highlanders from the first minute of the game forcing unusual defensive lapses from them. After creating space in midfield, the Chiefs had fullback Solomon Alaimalo burst into space and his speed saw off defensive efforts by wing Waisake Naholo and halfback Aaron Smith to score a startling try.

Messam appeared on a personal mission as he kept popping up in all the central action, and played a big role in the build-up to wing Toni Pulu's ninth minute try.

Then, punishing ill discipline by the Highlanders which saw two penalties conceded allowing Chiefs lineout drives which resulted in clever interplay between flankers Luke Jacobson and Sam Cane before prop Karl Tu'inukuafe picked up the ball at the goal-line tackle to drive over in the 13th minute for the try.

Just for variation, the Chiefs unleashed their scrum power and under advantage they saw halfback Brad Weber scramble for the ball after it appeared for rival Aaron Smith. But he was unable to control the ball and Weber secured it, drove ahead and then slipped a smart short offload to Jacobson who scored in the 25th minute.

Under pressure on their own line again, the Highlanders lost No.8 Luke Whitelock to the sin-bin for a deliberate knock-down and from the resulting scrum, the Chiefs worked the ball blind under penalty advantage but when wing Sean Wainui touched down in the corner it didn't matter.

Needing to get on the scoreboard, the Highlanders threw everything into the last few minutes of the half but when Wainui made a heavy tackle on flanker Dillon Hunt, the ball dropped free and the Chiefs swooped. Alaimalo got into space again, linked with lock Tyler Ardon whose quick pass found centre Anton Lienert-Brown who passed to Pulu who made the easiest of runs to the line for his second try.

Mustering more speed in the early stages of the second half, the Highlanders struck back in a powerful surged that resulted in second five-eighths Teihorangi Walden crossing five minutes into the half.

Walden then looked to be straight back in the action in a move which saw centre Rob Thompson cross, but a TMO decision found that Walden had lost control of the ball when tackled by Charlie Ngatai.

Five minutes later Ben Smith's intercept on his 22m line saw the ball worked at speed downfield and from side to side with key contributions from flanker Elliot Dixon on one side and hooker Ash Dixon on the other resulted in Walden getting his second.

Ben Smith looked to inspire his side in the same way that Messam had as the Highlanders battled neglecting his post at fullback to look for breaks around rucks and mauls and having success at last when in the 63rd minute his efforts saw replacement prop Aki Seiuli score.

Losing lock Michael Allardice to the sin-bin for persistent infringing by the Chiefs saw the Highlanders smell blood and they pummelled the goal-line again with flanker Shannon Frizell superb close to the line and denied once he made no mistake to score, but time ran out for the Highlanders who had confined the Chiefs to a penalty goal only in the second and denied them a bonus point. 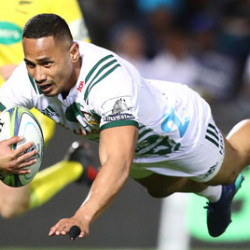