Fiji sent out a warning to Rugby World Cup rivals when ending 62 years of disappointment by hammering the Maori All Blacks 27-10 in Suva on Saturday.

Fiji are in the same pool as Australia, Wales, Georgia and Uruguay and if able to reproduce the form they unleashed on the Maori, and the power in their forward play, they are genuine contenders for the playoffs.

QUICK TAP: BLACK FERNS vs ENGLAND MATCH PREVIEW
It was Fiji's first win over the Maori since 1957 when they claimed the last of their seven wins in 29 games 17-8 at Carisbrook in Dunedin. The teams will play a second game in Rotorua next weekend.

Combining their traditional flair with a no-nonsense approach when running hard at the Maori defence, the Fijians took a significant toll forcing far more missed tackles than was comfortable. The offloading, so practised by other sides, came naturally to them and caused relentless problems for the New Zealanders.

Fiji poured the pressure on from the outset, using their big ball runners, including props Peni Ravai and Manasa Saulo, No.8 Viliame Mata and openside flanker Semi Kunatani with constant effect. They took advantage of inaccurate Maori kicking and while the New Zealanders absorbed the early pressure, it was from a 21st minute turnover when No.8 Akira Ioane went to ground, that Fiji got reward for their efforts.

First five-eighths Ben Volavola directed the Fijian backline well, firing miss out passes to his outsides to give them a chance to run and it was dangerous fullback Alvereti Veitokani who was on the end of a ball with a hole in the Maoris defence who raced through the gap to open the scoring. He had earlier featured in a breakout with wing Josua Tuisova that was only denied a try when the ball was knocked on short of the goalline.

A failed line kick by fullback Fletcher Smith opened up another chance, in a move which had already threatened to produce a try. Lock Leone Nakarawa stormed across field from the ruck and netball-passed to Mata on the left flank and he burst through tackles to score and take Fiji to a 12-0 lead.

A dropped pass from lock Tom Franklin saw hard-running flanker Semi Kunatani charge into the Maoris 22m area and in the breakdown first five-eighths Otere Black was penalised when playing the ball in the maul and was sin-binned for his efforts, two minutes out from halftime.

Fiji chose a scrum in front of the Maori posts but second five-eighths Lopani Botia lost the ball diving for the line in halfback Te Toiroa Tahuriorangi's last-gasp tackle.

With Black still off the field early in the second half, Fiji unleashed their attacking power from their own 22m, albeit after a partial chargedown of a defensive kick by Volavola. He regained the ball and ran into space before linking with the ever-present loosies combo of Waqaniburotu and Kunatani who carried the ball forward and linking with wing Henri Seniloli before centre Waisea Nayacalevu took the final pass to extend the score.

?? FLASHBACK | With anticipation building for the Maori All Blacks clash against Fiji in Rotorua on July 20, we take you their famous clash against Ireland in 2010.

But with Black back, the Maori built their driving game, especially from lineouts following penalties and it was after a 53rd minute lineout that play developed with Mitch Karpik, who had a pin-balling type of game against the much bigger Fijian infrastructure, taking the ball to the line. He was pushed back but the ball was flung wide and wing Sean Wainui crossed unchallenged for the Maori side's opening try.

He was in again 15 minutes later after a five-metre scrum saw a long pass from replacement halfback Bryn Hall to Black, who drew the defence before connecting with Wainui who dived over in the corner.

Any hopes of a Maori comeback were doused when more skilful offloading from forwards and backs opened up the defence for Nayacalevu to score his second.

FT | Congratulations to @fijirugby on securing their first win against the #MaoriAllBlacks since 1957.

We look forward to the re-match in Rotorua next weekend.#FIJvMAB pic.twitter.com/gj5NuRAdr4— All Blacks (@AllBlacks) July 13, 2019 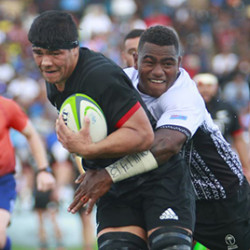