The All Blacks will go into their first Investec Rugby Championship Test, against Argentina in Buenos Aires on July 21 without several key players.

All Blacks coach Steve Hansen said at the side's Foundation Day for North Island players on Monday that several of the players involved in the Investec Super Rugby finals would not be required for the Argentine trip.

QUICK TAP: PENALTIES CONSISTENCY CONCENRS ALL BLACKS COACH
However, they were likely to be available for the Wellington Test against South Africa on July 27.

Extra players would be taken to Argentina to cover for their absence. After the South Africa Test the squad would then be reduced for the home and away Bledisloe Cup series that sees the first game in Perth on August 10 and the second game in Auckland on August 17.

The Rugby Championship is reduced in 2019 because of the Rugby World Cup.

The World Cup squad would be named after the Auckland Test, Hansen said.

Four months out from the World Cup, Hansen said the biggest challenge would be getting through the next few weeks and getting the best team selected.

Monday shred for these guys at the #AllBlacks Foundation Day in Auckland today ????????‍?? pic.twitter.com/KaeroTVRu3— All Blacks (@AllBlacks) May 20, 2019 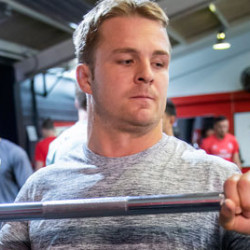