Five players to watch: The Blues There’s renewed hope for the Blues in the 2019 season with coach Tana Umaga unveiling a 38-man squad full of proven talent, rising stars and marquee signings.

Check out our list of five players who will be crucial if the Blues are to add a fourth Investec Super Rugby title to their rich history.

The 25-year-old loosehead prop wins his first full Super Rugby contract – a three-year deal with the Blues – after racking up 10 Tests for the All Blacks, and will look to fill the boots of the departed Pauliasi Manu.

Having played 17 games for North Harbour until the end of 2017, Tu’inukuafe was called into the Chiefs early this season as they dealt with an injury crisis. He has not looked back, scrummaging powerfully and adding his impact around the field, firstly at Super level and then for the All Blacks after his June debut against France.

Furthermore, Tu’inukuafe is one of three finalists for World Rugby’s Breakthrough Player of the Year, to be decided in Monaco on November 25.

Dalton Papalii
The Auckland loose forward was the bolter for the All Blacks on the Northern Tour.

But one cannot doubt his displays in 2018. The 21-year-old made his debut for the Blues earlier in the season, having made just four appearances for Auckland, off the bench, in 2017.

He was a key man for Auckland in the Mitre 10 Cup, making his presence felt at the breakdown and racking up a competition-high 169 tackles. Papalii’s versatility means he can operate in all three loose forward positions and win lineout ball, as well as bringing the softer touches to his allround game.

In 2015 he played for NZ Schools, while in 2017 he represented New Zealand Under 20s, scoring a try against England in the World Cup final. 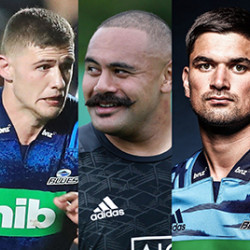