Mobility of New Zealand's props, a feature of their game in recent seasons, had declined and All Blacks coach Steve Hansen is keen for some remedial work to be undertaken to ensure they were back to their best for the upcoming Rugby World Cup.

Speaking at the Foundation Day camp at Papakura for the North Island All Blacks on Monday, Hansen said strategies had been put in place to bring the props up to the desired level.

QUICK TAP: FINALS PLAYERS WILL MISS ARGENTINA TEST
Hansen felt there might have been more focus on the gym and players' strength rather than their mobility. That might involve getting a couple of kilos off and getting a little more agile, he said.

Nepo Laulala was starting to look better, Joe Moody was a good, mobile and athletic prop, Angus Ta'avao didn't have that problem, Atu Moli would take a little longer because he had come back from a long injury but was a good athlete and Ofa Tuungafasi had played a great 80 minutes on Saturday against the Chiefs in probably his best game for the Blues in a long time.

"So we're moving in the right direction," he said.

Looking at the lack of match play for last season's third halfback in the squad Te Toiroa Tahuriorangi from the Chiefs said the main reason for that was Brad Weber was playing so well.

"He's leading well and Te Toiroa has come back from his off season probably not where he should have been and Brad has taken every opportunity he has got. So, does it concern me?

Tickets for the Maori All Blacks v Fiji match in Rotorua go on sale at midday on Tuesday! 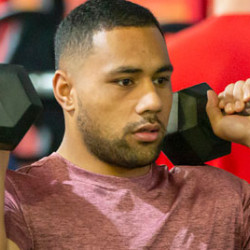