Setting the pace in the Investec Super Rugby competition has its own pressures, as the two-time defending champions are finding out.


CRUSADERS NEED STRONG FINISH
While assured of their playoffs place, the all-important home advantage through to the final stages of the competition has not yet been sealed, and they have only one game left to play. Because they have the bye in the last round, their final regular season game is at home to the Rebels on Saturday. In their previous five games, the Crusaders have drawn twice, against the Sharks (21-21) and the Stormers (19-19), beaten the Bulls (45-13) and the Blues (19-11) and lost to the Chiefs (20-47). Banking four points against the Rebels becomes crucial as they look to remedy the issues that have been affecting their play over the past month.
QUICK TAP: LIAM SQUIRE BACK IN FRAME FOR HIGHLANDERS
GETTING PHYSICAL
There are times when concentration on being physical in games can knock sides off course. As one of the more abrasive sides in the competition the Sharks came off second best when attempting to pressure the Hurricanes in Durban. Former Springboks coach Nick Mallett summed it up when telling supersport.co.za, "The difference between a South African side, specifically the Sharks, and a New Zealand team, is that they [the Sharks] show physicality with some skill, but not much game management; the Hurricanes have good game management, skill and physicality. So they're always going to come out on top because they'll score that extra try. And as long as a team that plays against the Sharks matches them physically at the breakdown and in tackles, they'll end up frustrated and start pushing and pulling, resulting in unsavoury incidents like we saw."

INJURY CONCERNS
Injuries start to assume greater importance at this time of the season in Rugby World Cup years and Springbok fans will be sweating on the loss of two Stormers internationals, South African captain and flanker Siya Kolisi, who is undergoing knee surgery while lock Eben Etzebeth suffered a broken hand in the Stormers' loss to the Lions at the weekend. With the Investec Rugby Championship starting in seven weeks, both players are in a race against time to be ready for the all-important series that will be the only preparation the Test sides have ahead of the World Cup.

?? PLAYER CATCH UP | @BluesRugbyTeam midfielder Ma'a Nonu sits down with his old mate Mils Muliaina to chat about his career with @Hurricanesrugby, and his move to the Blues.

MIXING IT WITH THE BEST
Given comments about the place of the Jaguares in Super Rugby, Reds coach Brad Thorn had a more positive view that he expressed after the Reds' 23-34 loss to the Argentinians in Brisbane. "There's a lot of Test players [in the Jaguares], but good, bring it on, let's have a Test match. It's a good competition, they can bring some Test players off the bench and we embrace that. Yeah, it had an impact on the game but I like my guys mixing with that. Taste it, embrace it, learn from it and get better from it. We want to play them. We weren't quite ready for them today but where we're going, I don't want any of those good teams going away. I want to play those type of teams. You don't want those good sides like the Crusaders going anywhere. Stay there, remain excellent teams and for us, let's get a feel for that, that's where that level is and let's work our butts off and get smarter and better and next time, let's rumble. I like that level being in there."

ROUND 1?7? | Everything is on the line in the second to last round of the regular season! So many crucial games, what are your picks for this week? ??#RaiseTheStakes pic.twitter.com/g1tAzhw5ae— Super Rugby (@SuperRugbyNZ) June 2, 2019 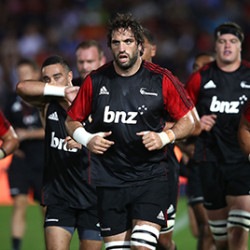