Neither Kendra Cocksedge, Kelly Brazier, Carla Hohepa or Renee Wickliffe would say whether next year’s Rugby World Cup would be their last, but one thing they do have in common is a dream to lift the World Cup trophy for a third time. But this one, on home soil.

“I think if you could write a script as to how you wanted to end your career, it would probably be written like that,” said Brazier, a World Cup winner in 15s and Sevens, Commonwealth Games gold medalist and Olympic silver medalist.

The 2021 Rugby World Cup, which will be played across three venues, Waitakere Stadium, Whangarei’s Northland Events Centre, and Auckland’s Eden Park from 18 September to 16 October next year, will be the fourth World Cup for Cocksedge, Brazier and Wickliffe. All four players have won two World Cups.

Brazier, Cocksedge, Hohepa and Wickliffe all started their World Cup journey together, at the 2010 tournament in England. 53-Test halfback Cocksedge can remember her first Cup as if it were just yesterday.

“In the semi-final I came off the bench onto the wing because Kelly got injured and I was the only back left on the bench. In the final, I couldn’t watch. The coaches told me to warm up to go on in the final minutes, but I said no don’t put me on.

Whilst it was an incredibly special occasion for Wickliffe, unfortunately she spent most of her first World Cup battling injuries. “I tore my right calf in our first game, to the point where I was ready to head home,” said the Black Ferns and Bay of Plenty Volcanix winger.

“Our physio got me back on the field for the semi-final, but I hurt my ribs. I was able to play in the final and then I broke my finger.”

Wickliffe recalls the Black Ferns receiving three yellow cards in the final against England at the Twickenham Stoop. But they were able to hold on and claim the Cup with a 13-10 victory.

Hohepa believes it was that World Cup that put women’s rugby on the map.

“People recognised players and the stadiums were full. The interest was building. I remember we had a meeting about making our Facebook accounts private and we laughed about it and thought, no one will add us. But after the first game we all started getting requests from people all over the world.”

Unfortunately, the 2014 tournament didn’t finish with the same jubilation. In fact, the Black Ferns didn’t even make it out of pool play in France that year. After tasting success for so long, the loss to Ireland in their second match, was a bitter pill to swallow. There were no quarterfinals in 2014, which meant the Black Ferns were knocked out of finals contention.

“I don’t cry too much, but I definitely shed a tear that day. I was absolutely gutted. I think we were a bit complacent. The rest of the world were chasing us, and we didn’t improve as much as we should have,” said Brazier.

“I felt like I let me family and my country down, but more so the girls,” said Wickliffe.

“If you think of the legacy and the consecutive times we had won before 2014, it was hard to think we had lost. But it also motivated us to lift each other, to except the loss and get home to reset.”

Despite that painful campaign in 2014, the Black Ferns are still the most successful team in Rugby World Cup history, having won an unprecedented five titles. They are the current defending champions, after winning in Belfast in 2017.

All four players said that while it’s a cliché, it’s the culture they have within their environment that has made them so successful when it comes to the pinnacle event. Hohepa said rugby is part of her DNA. When she wears the black jersey, she is there to do a job, but they all have family who lift them up and drive them to be the best in the world.

It’s also about the legacy. For Wickliffe, it’s giving back to the ladies who played before her, who paved the way for the current team to continue to represent their country, whānau, province, and clubs. 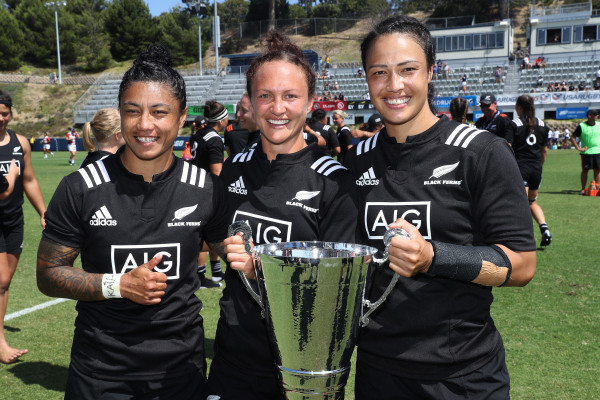 Having the chance to compete for the Rugby World Cup in Aotearoa next year is a dream come true for these Black Ferns legends. The opportunity to pull on the black jersey at the tournament in front of family and friends is what has kept Cocksedge motivated over the last four years.

“I was going to retire in 2017 after the World Cup, but one of our girls, Rawinia Everitt had an injury which meant she couldn’t play anymore. It made me rethink because I could still physically play.

“Because this tournament is on home turf, it definitely helped drive me to want to continue. I never imagined I’d have the success I’ve had in my career but winning a World Cup at home would top it all off. It would be the top of the mountain.”

The Black Ferns will look to tap into the brains of some of the All Blacks players and management who were part of the 2011 tournament, delving into how they dealt with the pressure of having a World Cup at home. Cocksedge said Sam Whitelock always wants to offer his knowledge and experience, while she has good relationships with fellow halfbacks, Aaron Smith and TJ Perenara.

There is just over a year until the tournament kicks off and with the Black Ferns’ Test schedule uncertain for the remainder of 2020, the Farah Palmer Cup will play an even bigger role in the World Cup build-up.

It's been 3⃣ years to the day that the #BlackFerns won the 2017 @rugbyworldcup in Belfast!

This will all be going down on our OWN BACKYARD next year & we can't wait 🎉#RWC2021 pic.twitter.com/yKgEuYC0yb

Hohepa will play for Waikato this season, alongside her sister Chyna. If she makes the Black Ferns squad in 2021, she doesn’t just want to participate. She’ll be there to win it.

“If I play at home in a World Cup doing what I love, with both my sons, my partner and all my friends and family on the sideline, it will top off the last 13 years.”

Brazier plans on having an unbelievably busy 2021, with the Tokyo Olympics also on the calendar. But it’s what she trains for, day in, day out.

“I know no other. My focus will purely be on doing everything I can to put my hand up for selection for the Olympics and then giving everything I can to the 15s, rather than think about both at the same time. It’s about staying present for each event, stick to what I know and hopefully I can be successful in both in the same year, which would be unreal.”

View all
Ranfurly Shield roundabout continues
Yet another Ranfurly Shield changeover has occurred in Mitre 10 Cup rugby with Hawke's Bay achieving their seventh successful challenge by beating Otago 28-9 in Dunedin in the last game of week four of the competition.
Farah Palmer Cup Week Five: Wrap
Waikato and Auckland have created a split at the top of the North Pool, Auckland leading on 21 points but Waikato, with a game in hand, on 18 points in the Farah Palmer Cup.
Farah Palmer Cup Round Five: Team Lists
A crucial round in the Farah Palmer Cup, Canterbury and Waikato are the only two teams in the competition who remain unbeaten, after Northland caused a huge upset last week defeating Counties. There is a log jam at the top of both the North and South tables, with Auckland, Waikato, Bay of Plenty, Counties and even Northland vying for the two top spots. While in the South pool, Canterbury, Wellington, Manawatu, and Otago are all battling it out for their respective top places. The top of the South table clash between Canterbury and Wellington promises to be a showstopper.
Red Bull Ignite7 returns with exciting new format
Red Bull Ignite7 breaks new ground again in 2020 as the country’s leading sevens players go head to head this December.
Mitre 10 Cup Round Four: Team Lists
The Ranfurly Shield could have its fourth holder in less than three weeks when Hawke’s Bay head south to challenge new owner Otago in Dunedin on Sunday.
The moment South Africa knew they would win the World Cup
World Rugby's player of the year in 2019 Pieter-Steph du Toit said an incident eight minutes into the game told him the Springboks would win last year's Rugby World Cup.
NZR acknowledges SARU statement
New Zealand Rugby (NZR) has acknowledged the South African Rugby Union (SARU) statement to explore entering their existing Super Rugby teams in the PRO Rugby competition in Europe.
Wallabies power up scrum for Bledisloe Cup
Adaptation has always been a necessary quality in rugby, whether to conditions, match situations or injuries but Covid-19 has added an extra demand as the Wallabies have found while preparing for next week's first Bledisloe Cup Test against the All Blacks in Wellington.
Auckland Storm head coach departs for the arrival of his first child
Auckland Storm Head Coach, Richie Walker has passed his head duties to his fellow coaching team as he jets back to San Diego, California for the birth of his first child.
Mitre 10 Cup & Farah Palmer Cup: Coaches XV 2020
Several of our former players are giving back to the game in a number of different ways and in particular in the coaches’ space.
Downer Match Appointments: Mitre 10 Cup Week 4 & Farah Palmer Cup Week 5
The Ranfurly Shield has made its way down south to Dunedin where it goes on the line against the Hawke’s Bay Magpies on Sunday afternoon, while in the Farah Palmer Cup, many teams are in must-win territory if they are to feature in the finals in a couple of weeks’ time.
Fa’asiu Fuatai suspended for three weeks
Bay of Plenty’s Fa’asiu Fuatai has received a three-week suspension after being red carded in the Wellington v Bay of Plenty match in Wellington on Friday 25 September.
The upsets continue in the Mitre 10 Cup
Otago pushed Taranaki into an unwanted place in the record books when securing a 30-19 win to claim the Ranfurly Shield at Inglewood in Mitre 10 Cup play on Sunday.
Northland Kauri turn heads in round four
Northland marked one of their finest results in the Farah Palmer Cup when beating Counties Manukau 32-20 at Pukekohe Stadium on Sunday.
Farah Palmer Cup Round Four: Team Lists
Four teams remain unbeaten in the Farah Palmer Cup heading into round four of the competition. Wellington and Canterbury in the South and Counties Manukau and Waikato in the North. What will the situation be after the weekend? For any games outside of the Auckland region, crowds can attend, so make sure to go out and support your local team.
Cheika to help guide Pumas down under
Thought you had seen the last of former Wallabies coach Michael Cheika? Think again.

Farah Palmer Cup Fast Five: Hazel Tubic
For this week’s FPC Fast Five we catch up with Counties Manukau playmaker Hazel Tubic. The 29-year-old is one of the most experienced players running around in the domestic game and is eyeing a return to the Black Ferns ahead of next year’s Rugby World Cup.
Referees confirmed for Bledisloe Cup
The two Bledisloe Cup matches between Australia and New Zealand will be refereed by non-neutral referees due to the Covid-19 restrictions limiting global movement.
Coaches kōrero: Farah Palmer Cup Week 3
Every week throughout the Farah Palmer Cup, allblacks.com will chat with the Black Ferns coaches about their thoughts on the competition as they build towards Rugby World Cup 2021 in New Zealand.
All Blacks Podcast with Angus Ta'avao
Multi-talented prop Angus Ta'avao joins the All Blacks Podcast to talk through his unique journey into the All Blacks.