It was the Rieko Ioane Show at QBE Stadium in Auckland on Saturday as he scored four tries in the Blues' 28–20 Investec Super Rugby win over the Sunwolves.

The win ended the Blues horror run of eight home losses out of their last nine games and left the Chiefs languishing at the bottom of the New Zealand Conference. It was especially telling after the heavy travel toll the side had endured.

QUICK TAP: CRUSADERS PUT CHIEFS TO SWORD
The All Blacks wing may have lacked chances on attack in the side's first three games – all losses – but he relished the quick ball he received from his insides to dish out a timely display of his finishing ability.

He was the 18th player to score four tries in a Super Rugby game, and the fourth Blues player joining Joeli Vidiri, Doug Howlett and Mils Muliaina.

While the Blues got out to a 25-13 lead in the 57th minute, the Sunwolves struck back five minutes later when replacement flanker Uwe Helu finally broke determined Blues defence to score and get his side back within five points.

Silly mistakes proved costly for the Sunwolves, and it continued through until the end of the game when attempting to get back within the seven point loss margin they made bad decisions.

It was the case throughout the night with two sin-binnings firstly for fullback Semisi Masirewa at the start of the fourth quarter, then replacement hooker Nathan Vella with six minutes remaining.

From the latter, replacement first five-eighths Otere Black kicked the penalty goal to give the Blues an eight point buffer.

Earlier after they had avoided conceding a try in the 46th minute when wing Tanielu Tele'a stepped into touch, they attempted a lineout ploy only to infringe and give the Blues a five-metre scrum. With a penalty advantage, the Blues moved the ball through first five-eighths Harry Plummer and fullback Melani Nanai to give Ioane his hat-trick try.

The Sunwolves paid the price for obstruction off the side of the scrum by flanker Shuhei Matsuhashi. The Blues were able to kick to the corner and use their lineout to set up a play which saw first five-eighths Harry Plummer pass inside to hooker James Parsons.

He slipped the ball to wing Tanielu Tele'a who used his strength to carry the ball to the line and from the ruck, the ball was worked to the blind where wing Rieko Ioane slipped over in the corner to open the try scoring.

The Sunwolves struck back, with second five-eighths Michael Little showing patience while settling his side before slipping a pass behind his back to No.8 Rahboni Warren Vosayaco. The ball rebounded off his knee, as revealed during a TMO study, and he regathered the ball and slipped it inside to impressive first five-eighths Rikiya Matsuda who had been supporting at pace.


Matsuda had a clear run for the line and added the conversion to give his side a lead of 13-8 after 29 minutes.

But the Blues played the basics to get back into an attacking position and when several penalties were conceded by the Sunwolves, the Blues finally won a scrum about five metres out from the line. Controlling the ball at the back and putting on the shove, the ball emerged and No.8 Akira Ioane ran blind to fling a long ball across the line to brother Rieko for his second try.

Manawatu halfback Jamie Booth was a constant thorn in the side of the home defence, several time featuring in sniping runs while skipper Little was a controlling influence with hard runners in wing Jamie Henry and fullback Semisi Masirewa making their presence felt. 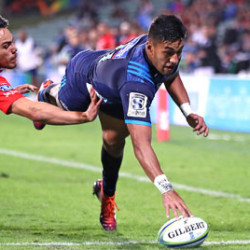