Fourth for NZ in Hamilton as Fiji win 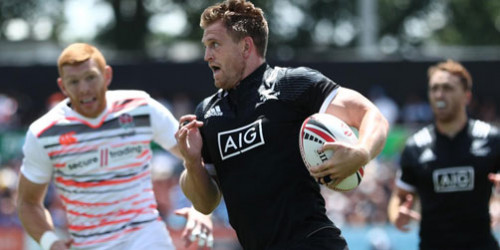 Too many mistakes, many of them unforced, saw the All Blacks Sevens miss a chance to claim third place in the HSBC World Sevens in Hamilton when an injury time dropped goal gave Australia an 8-7 win.

In many ways the game was similar to the quarterfinal loss New Zealand suffered in Sydney last week. Dropped balls, overthrown lineouts and penalties conceded all contributed to New Zealand's loss.

QUICK TAP: VILIMONI KOROI REACHES ONE YEAR MILESTONENew Zealand had earlier lost to Fiji in the semifinal while Australia lost to South Africa. Fiji beat South Africa 24-17 in the final-their first win of the 2017-18 series.

New Zealand are still in second place on the overall series points table with four of the 10 rounds completed. South Africa still lead with 77 points. New Zealand have 69, Fiji 62 and Australia 60.

The All Blacks Sevens quarterfinal against England started at a frenetic pace.

England scored first through Ruaridh McConnochie after a minute. New Zealand responded with a third minute try to Tim Mikkelson, his 200th in the series which lifted him to sixth place on the all-time try-scoring list, followed three minutes later by Vilimoni Koroi, who made the most of an England sin-binning to seal the 19-12 win.


The semifinal was one out of the box and representative of the traditional rivalry between the All Blacks Sevens and Fiji.

Josua Vakurunabili scored with a great demonstration of Fijian support play which needed to continue after a fine cover tackle by Vilimoni Koroi. Fiji looked set for another try-scoring chance but play broke down with a knock-on which gave New Zealand possession and a clever backhand pass from Mikkelson to Sam Dickson created New Zealand's first try scoring chance.

New Zealand had another chance before the break after a turnover produced ball. Koroi opted for a kick to the in-goal but the ball beat him to the dead ball line.

Fiji led 7-5 at the turn and looked to make the best of winning the ball from the restart for the second half, but they turned over the ball and from the breakdown Koroi found a gap and raced in beneath the posts and converted the try.

But Fiji were straight back onto attack in spite of a superb cover tackle by Koroi. He was penalised in the subsequent play at the breakdown and it was Mesulame Kunavula who crossed with the conversion giving Fiji a 14-12 lead.

Dangerous runner Jerry Tuwai made a strong sideline break but Etene Nanai-Saturo made a deadly covering tackle. Fiji won a scrum in front of the New Zealand posts and looked to have scored in the corner, but the ball was dropped over the goalline.

However, in a potentially threating burst downfield Luke Masirewa was unable to hold a pass and from the resulting scrum Fiji made the most of the last 13 seconds to run the ball out and claim a 14-12 win.

FT | A heartbreaking loss to a determined Fiji team, with the #AllBlacks7s going down 14 - 12.


In the playoff for third and fourth Australia built up for more than nearly four minutes and 16 tackles before Scott Curry managed to turn the ball over just out from the New Zealand line with a fine recovery at the breakdown tackle where New Zealand won a penalty.

They kicked for touch and from the lineout worked a move with Curry sweeping around from the front to find a gap and have a straight run to the line for a try.

Curry was nearly in again after Australia lost the ball and then infringed to set Joe Webber free. He threw a long ball but the defence got across to shut Curry out.

Twenty-three seconds from the changeover Kurt Baker was sin-binned for a neck roll tackle on an assistant referee's call.

Early in the second half Australian Paul Scorch stripped the ball from Masirewa and regained the ball to score. Their situation was compounded when a poor pass from the breakdown forced New Zealand deep into their 22m area, and a knock-on saw Australia win a scrum. However, the Australians conceded a penalty and New Zealand cleared into the Australian half.

But New Zealand over-threw to the lineout and Australia created several chances but desperate New Zealand defence held them out. Relief finally came when Curry finally forced a knock on from Stannard.

New Zealand built an attacking surge but a minute from the end Stanaway was unable to hold a ball and a scrum was forced allowing Australia to work the ball downfield. Australia won a penalty after the final hooter had sounded.

Australia tried to probe the New Zealand defence but when Stanaway was penalised 23m out from the posts Stannard landed the goal to claim the win.