Springboks coach Rassie Erasmus believes his side's underdog status will make preparing to play the All Blacks easier in Wellington on Saturday but New Zealand coach Steve Hansen knows the strength of the old rivalry will make South Africa dangerous.

A bonus point win for New Zealand would secure another Investec Rugby Championship in Wellington, with two rounds still to play.

QUICK TAP: ALL BLACKS BENEFIT FROM FORCED CHANGES
Hansen said: "They'll be a big challenge. They pride themselves on lifting their performance particularly when they play us. They've lost two now so they'll be pretty desperate and we'll need to match that and be desperate ourselves."

With more time to reflect on Saturday's win over Argentina, Hansen said the positives to come from it were securing a bonus point win, scoring some nice tries and the chance for players to grow.

Lock Brodie Retallick's rotator cuff shoulder injury would rule him out of consideration to play South Africa and with Luke Romano suffering a calf strain the replacement would be Auckland lock Patrick Tuipulotu, who marked his return to rugby with a hat-trick of tries in the Mitre 10 Cup win over Tasman.

A scan on Monday would confirm how long Retallick would be out of action but a worst case scenario was six weeks and a minimum of three weeks.

Second five-eighths Ngani Laumape had grade one ligament damage to his knee so would be out for two to three weeks.

Sonny Bill Williams was having an X-ray on Monday and if it was clear he would be available while Rieko Ioane was already set to play.

Hansen said hooker Dane Coles had turned the corner in his recovery and was starting to look more like an athlete with definition showing in his calf muscles while he was also exhibiting some of his more familiar chirpy traits. That was important, he said, because when high performance sportspeople had injury-enforced breaks from the game it could start to effect them. But Coles was back to his usual self.

The play of fullback Ben Smith had again demonstrated the worth in players having sabbatical breaks and Hansen said it was a consistent pattern that had been seen with players.

When Ma'a Nonu returned from a long break after suffering a broken arm he had played the best rugby of his career while similar qualities had been seen from Richie McCaw and Dan Carter, who suffered an injury upon his return but who once clear showed the benefits, he said.

The atmosphere was ?? at a sold-out Trafalgar Park in Nelson for #NZLvARG! Don't miss out on your last chance to see the #AllBlacks live in NZ this year when they take on @Springboks in Wellington on September 15. 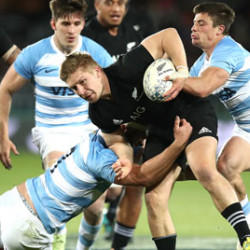