Rampant Highlanders maintained their unbeaten run at home, and turned back the Crusaders in a pulsating 25-17 win at Forsyth Barr Stadium in Dunedin on Saturday.

Ironically, it was two last quarter penalty goals by first five-eighths Lima Sopoaga that sealed the game for the home side and turned back the three losses they suffered at the Crusaders' hands last year.

But the penalty goals didn't tell the story of this game which featured some impressive punch and counter punch and some shuddering spot tackling, especially from Highlanders loosemen Luke Whitelock and Dillon Hunt.

Prowling the sideline after replacing flanker Liam Squire, Elliot Dixon provided vital impetus at key moments and scored his own try as reward.

None worked harder to get the Crusaders machine moving than hooker Codie Taylor, who was outstanding with the ball and providing link play to his outside backs.

Thriving in the opportunities provided was left wing Tevita Li, who demonstrated his ability to beat players and link with his support players.

No surprise attended the rip-snorting start to the game, the Highlanders failing to make the most of two early chances to build a scoring platform from lineouts and it was predictable that at their first chance the Crusaders would strike.

It came in the fifth minute from a Luke Romano take at the lineout which saw left wing George Bridge burst from the short side onto a perfectly weighted-in pass by second five-eighths Tim Bateman. Running a superb angle, he had the gas on the defence and went all the way for the opening try.

The Highlanders responded by letting their big men do the grunt work through the middle of rucks with lock Tom Franklin featuring with two strong drives while hooker Liam Coltman got up off the ground from his own surge and found the ball at the base of the ruck to drive over for their ninth minute response.

Five minutes later Highlanders Li showed his power of fend and speed to beat Crusaders' centre Jack Goodhue and two other defenders before in-passing for centre Rob Thompson to set up the ball. The Highlanders arrived en masse and drove again towards the goal-line allowing Sopoaga to step his way through for the try.

Some outstanding phases of play tested the endurance of both sides as play ranged back and forth and it was from one 38th minute example that it appeared Crusaders' No.8 Jordan Taufua looked to have scored a fine team try. It came after the Highlanders had been building their own counter attack from a kick-chase by Ben Smith.

Just when it seemed the Highlanders were building a chance, the ball was dropped by halfback Aaron Smith. Crusaders' fullback David Havili was onto the ball and raced down the sideline. He linked with Bateman and when he was tackled, he was ruled to have knocked the ball on before flanker Heiden Bedwell-Curtis, who was another key contributor for his side, took the ball ahead to see the ball out for Taufua to cross. But before the conversion was taken, Ben Smith was suggesting a knock-on had occurred when Bateman was tackled and a TMO check agreed.

Naholo was sin-binned for a high tackle on Bedwell-Curtis moments after the second half started but the Crusaders were unable to capitalise. They looked to build from a lineout maul but it broke down and ended in touch. The Highlanders absorbed the pressure and then when Li had a kick ahead rebound off Hunt, he regathered the ball and passed to prop Siate Tokolahi who liaised with Coltman.

The ball came clear for Ben Smith to feed Seiuli into a gap. The prop then threw a long ball outside where replacement flanker Elliot Dixon was roaming. He ran back against the grain to score.

A typical Crusaders response followed when Havili ran the ball from his own goal-line. Another example of the innate Crusaders team play saw replacement wing Manasa Mataele get the ball from Taylor. He chipped ahead, regathered and fed replacement halfback Bryn Hall in for a 54th minute dazzler which got the Crusaders back to 17-19 down.

But that was close as the Crusaders got as the Highlanders left their defence a cog to deny them and to claim a deserved win. 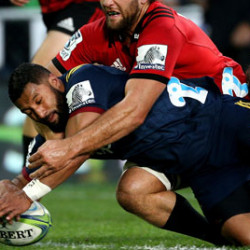