Containing a re-animated Hurricanes side carried the Highlanders to a nerve-tingling 17-16 win at Forsyth Barr Stadium in Dunedin.

After their thumping at the hands of the Brumbies last week, the Hurricanes lifted their effort and were more competitive, just failing to seize the advantage in the middle stages of the second half in the repeat of last year's Investec Super Rugby final.

Adding to the excitement of the close contest was the ruling out of two Highlanders tries in the 65th minute; the first when Malakai Fekitoa was ruled not have grounded the ball clearly at the base of a goalpost and from the resulting five-metre scrum an in-pass from halfback Aaron Smith to replacement No.8 Liam Squire was ruled forward.

However, by keeping the Hurricanes pinned in their own half a penalty goal chance was landed by replacement five-eighths Hayden Park with four minutes remaining.

Humid conditions inside the stadium, after a hot day in Dunedin, made it warmer than usual and it became a test of stamina.

Two determined defensive sides butted heads throughout the first half and while the Hurricanes found openings in the defences, most notably through lock Mark Abbott and prop Jeff Toomaga-Allen, their offensive execution let them down and chances were lost.

Instead, it was the Highlanders who made the most of their one concerted build-up, courtesy of some deft passing initially by halfback Aaron Smith and latterly by the outstanding timing of first five-eighths Lima Sopoaga who weighted a fine pass to centre Malakai Fekitoa who scored in the ninth minute.

Otherwise it was all down to the goal-kicking of Sopoaga and his Hurricanes rival Beauden Barrett. Sopoaga added a demonstration of his defensive qualities in making vital covering tackles to deny tries, while he played a key role in denying wing Julian Savea a try at the three-quarter mark.

The Hurricanes had a penalty advantage when Barrett summed up the situation to lob a goal-line kick across to Savea but he was unable to ground the ball after Sopoaga raced in to get his hands on the ball to deny the try after Patrick Osborne held Savea in the tackle.

Barrett seized the initiative in the last half-hour and found a handy ally in fullback James Marshall.

The second half produced a more settled display from the Hurricanes, although they again took time to settle before inspiration came in the form of a solid break by league convert and second five-eighths Ngani Laumape, and Barrett, who produced a key break which took play to the line and then in the lead-up to halfback TJ Perenara's 55th minute try, he joined the heavies in carrying the ball up.

There was much more evident hunger from the big Hurricanes machinery up front with a series of concerted drives which pulled in the defences and allowed Perenara his chance.

Home wing Matt Faddes made some valuable saves in the face of Hurricanes raids while replacement centre Jason Emery stretched the defences consistently. Hooker Liam Coltman was like a fourth loose forward in the breakdown plays while flanker Shane Christie had his hands full attempting to contain a rampant Ardie Savea. 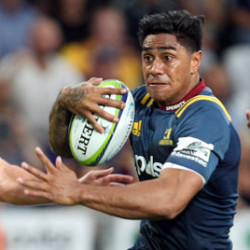