Facing the music for the first time away from home this year, the unbeaten Highlanders are well aware of the threat posed to them when meeting the Hurricanes in Investec Super Rugby on Saturday in Wellington.

Coach Aaron Mauger said the Hurricanes had been playing impressive rugby so far this season.

QUICK TAP: CRUSADERS RE-SIGN TWO PIVOTAL PLAYERS
"We know the magnitude of the challenge, especially going up there," he said.

It would be a big occasion for them with TJ Perenara playing his 100th game but the Highlanders had prepared accordingly.

Challenges were expected from the Hurricanes across the field, they had big, physical athletes who were looking to provide space for the playmakers.

"They've got three world-class playmakers there in Perenara, Barrett [Beauden] and young Barrett [Jordie] so there are not too many chinks in their armour.

"We've come up with some strategies through the week to try and expose them where we think we can and look forward to testing that out on Saturday night," he said.

Tyrell Lomax will start the game at tighthead prop. Mauger said Siate Tokolahi had a big workload during the first three games while Lomax had earned the opportunity after good play during the pre-season and last week for their Highlanders' Bravehearts side.

"We talk a lot about the value of our squad and the importance of using everybody in our squad and it's a reflection of that, that he comes in and makes his debut in front of his family," he said.

Mauger said he knew the Hurricanes coaching team well and respected them and he expected they would have some good plans in place for the Highlanders, just as they had when beating the Crusaders.

"It's going to be a pretty tight battle this weekend," he said.

As a former mid-field operator, Mauger said the challenge had been put in front of the Highlanders' mid-field over things the coaches would like to see in their game and they had responded in their training.

"That's transferred into performance, they're playing with real confidence which is something we ask but you can only be confident if you put the work in during the week and they've all done that. The thing is they're all helping each other not just Tei [Walden], Matt [Faddes] and Robbie [Thompson] who have played the bulk of the minutes so far but we've Sio Tomkinson and Richard Buckman, who hasn't played yet, Thomas Umaga-Jensen, all those guys are part of it so the whole squad is helping out," he said.

Mauger said loose forward Elliot Dixon had not worried about things he couldn't control this year and when he had his minutes he had gone out and nailed them.

"I think he's really matured in that area and played 45 minutes at the weekend which were probably 45 of the best minutes he's played in the last year or so that is probably a reflection of the space he's in," he said. 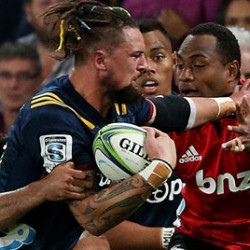