Demonstrating confidence, continuity and capability, everything the Blues lack, the Highlanders dished out a 34–16 lesson at Eden Park on Friday before heading to South Africa with their Investec Super Rugby hopes alive.

For the Blues it is once again about attempting to build something from the ashes of another under-achieving campaign. With all their injury woes it was always going to be an ask, the Blues didn't have the desire or execution the Chiefs, similarly down on injured players earlier in the year, demonstrated.

On top of that a loose forward dynamo in the shape of Shannon Frizell repaid the faith of the Highlanders' management by rewarding them with a hat-trick of tries, none sweeter than his third. It came after replacement halfback Aaron Smith took a tap penalty, linked with fullback Ben Smith, who in-passed to Frizzel for a try that pushed the game beyond the Blues at 34-11 with 20 minutes to play.

The disparity in execution was obvious from the outset.

Two turnovers in the first five minutes, two Highlanders tries; the first from the chargedown of an attempted clearance by first five-eighths Bryn Gatland and the second after a midfield turnover, a kick and regather by Waisake Naholo which resulted in a penalty kick to the corner and a five-phase build-up before Frizzel scored his first.

Once again the Blues found themselves chasing the game but they got down to work with some powerful exchanges from the forwards who powered into Highlanders defenders. As they played moved from one side to the other, with strong surges from locks Patrick Tuipulotu and Jimmy Tupou, it was halfback Jonathan Ruru who got the ball down over the line.

Gatland landed two penalty goals to get within a point but with punch and counter punch as the sides each had their chances to get the ball down the ground, mistakes at key moments, with fullback Stephen Perofeta dropping a ball in his 22m when there were chances on the outside, matched by the Highlanders conceding ball at turnovers.

But it was from another strong surge at the Highlanders line that the ball squirted out of the side of the maul and into Highlanders hands. Within a phase or two the ball was back in the Blues 22m area after centre Rob Thompson took a good gap and set up the ball from which Frizzel scored his second on the end of the backline in the opposite corner.

Both hookers, with their captaincy roles, were constantly in the air of referee Marius Jonker, Blues skipper James Parsons responding to Jonker's request to let them do their job by saying, "We're desperate, our season is on the line."

The Highlanders could have been further in front at the break after left wing Tevita Li escaped the clutches of the Blues defenders and provided a perfect ball for Hunt, but with the line wide open he dropped the ball. Rain had fallen during the second quarter, and had an effect on the handling of both sides.

The Blues kept trying, and newcomer Tumua Manu claimed a try with 11 minutes left but the Highlanders defence was too committed to allow a late flurry from the home side. It was a reflection of their night that another pass, of many, that went to grass rather than hand, allowed the Highlanders to finish the game on the attack. 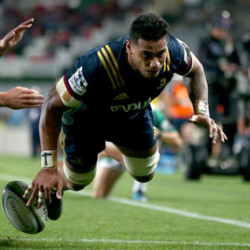