Desperation saw the Highlanders' heavy guns turn on their best effort of the season to end their Investec Super Rugby losing streak in claiming a 24–12 win over the Blues in Dunedin on Saturday.

Pressure, determination and opportunism from the home side ensured their retention of the Gordon Hunter Memorial Trophy and any hopes the Blues had of ending their lack of wins against New Zealand side fell down on their own inability to take their chances.

QUICK TAP: HURRICANES SURVIVE SUNWOLVES SCARE
Loose forwards Elliott Dixon at No.8 and his flankers James Lentjes and especially Shannon Frizell were ever present dangers in leading the charge for their side. That saw lock Tom Franklin and hooker Liam Coltman create havoc in support play, with Coltman especially impressive over the ball at the breakdown.

Shutting down the attacking threats of wing Rieko Ioane, second five-eighths Ma'a Nonu and fullback Melani Nanai, the Highlanders denied the Blues options in what became a sloppy night with fundamental errors occurring as a result of the pressure.

Nanai did score a consolation try in the 79th minute, on the end of a crosskick by replacement first five-eighths Harry Plummer, but it was all too little, too late.

Having dominated territory and possession in the first quarter, it wasn't until the 22nd minute that the Blues gained any reward. It came after first five-eighths Otere Black provided Nonu with a chance to take on lock Jackson Hemopo, who had been stationed in the backline.

Beating him with comfort, Nonu ran into space, drew the cover defence and then timed his pass to supporting flanker Tom Robinson who ran in the try.

But continuing their recent trend of scoring and then conceding points, they saw halfback Jonathan Ruru delay in clearing from a ruck in his 22m and he was captured while attempting to make a kick, and the ball rebounded to the in-goal where wing Caleb Clarke got to the ball to make the touchdown.

A five-metre scrum for the Highlanders resulted and they worked the ball into position with Franklin making a first strong surge at the goal-line before the ball squirted out the side of the ruck for Frizell to seize the ball and corkscrew his way over for a 26th minute try.

It was a half of missed opportunities for the Blues who would have been disappointed with the lack of reward for much of their possession gained. They enjoyed 58 percent and typical of their lack of opportunities taken was a chance late in the half when they attempted to make play from a five-metre scrum, only for home centre Patelesio Tomkinson to make an intercept to clear out downfield.

While caught, the Highlanders finished the half strongly and could have scored a second try only for the ball to be lost with the Blues clearing.

Highlanders' enthusiasm shone at the start of the second half and they had a significant moment at a five-metre scrum out from the Blues' line when achieving their best pressure of the game to win a penalty try that took them out to a 14-5 lead.

Five minutes later, from a ruck on halfway, replacement halfback Sam Nock attempted to clear the ball to centre TJ Faiane but the intercept was taken by wing Matt Faddes who was unchallenged in his run to score.

FT | The @Highlanders have claimed a crucial win over the @BluesRugbyTeam to keep their playoff hopes alive!#HIGvBLU pic.twitter.com/nyKdhGCEEB— Super Rugby (@SuperRugbyNZ) April 20, 2019 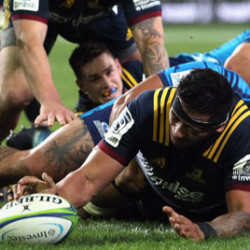