Coping with an outstanding Reds effort to end six seasons without success in New Zealand, the Highlanders overcame some last quarter nerves to win 36–31 in their Investec Super Rugby round two opener in Dunedin on Friday.

Extending their home record to 13 consecutive wins, the Highlanders denied the Reds their sought after first win on New Zealand soil since 2013.

QUICK TAP: SUPER RUGBY PREVIEW - CRUSADERS V HURRICANES
The winning of the game came seven minutes from the end, when the Chiefs capitalised on a poorly-directed Reds kick from their own territory was run back at them by fullback Ben Smith. He linked with replacement centre Matt Faddes who took the play into the Reds' 22m area where replacement halfback Kayne Hammington almost got over.

But when the ball emerged from the ruck, flanker Dillon Hunt was on the end of the line to score.

It was a game to try the nerves of home fans after the Reds gained a deserved 31-29 lead with 21 minutes left.

The Highlanders mounted attack after attack, as they had last week in coming from behind to beat the Chiefs, but they were making unforced errors in passing and catching lapses. Earlier in the game they made life difficult for themselves with lineout losses off their own ball.

Then there was the effort of the Reds who showed they were a side on the rise with a committed display with fine control shown by halfback Moses Korovi, second five-eighths Samu Kerevi and centre Jordan Petaia with some heady play from fullback Bryce Hegarty.

But in the crucial moments it helped having flanker Shannon Frizell in such outstanding touch and when he was relieved Hunt lifted his effort while No.8 Luke Whitelock was again outstanding in defence and in carrying the ball upfield.

It wasn't only the players who needed a breather at halftime in Dunedin, fans in attendance and watching on television appreciated the break after an action-packed first half which saw the Highlanders lead 24-17.

Both sides benefited from forward passes that went undetected in the lead-up to tries, the first by the home side in the 32nd minute and the second to the Reds in the 38th minute when Korovi cashed in on the Highlanders' first half Achilles heel, their lineout losses, and some good work by wing Sefa Naivalu to give Korovi his chance.

The Highlanders opened the scoring when centre Rob Thompson, who had been a livewire throughout the 19 minutes he was on the field before leaving with a leg injury, was able to finish off a decision to take a lineout throw from a penalty.

The Reds responded through right wing Chris Feauai-Sautia who stepped his way through the wide Highlanders defence with ease.

Frizell started to make his mark on the game through middle stages of the first half when after a lineout drive it was the big All Blacks flanker who powered over for a try.

Then almost immediately after at the restart good work by Frizell at the breakdown resulted in a penalty. The Highlanders went for the lineout and from the take, halfback Aaron Smith fired a ball to Thompson's replacement Faddes, who was running back on the angle. The ball looked forward but Faddes created a chance and from the ruck the ball was flung wide by first five-eighths Josh Ioane where Ben Smith was one of three players who could have scored the try.

FT | What an absolute thriller to kick-off round 2?. The @Highlanders take the win in the dying minutes for the second week in a row!#HIGvRED #RaiseTheStakes pic.twitter.com/X4BK54q72h— Super Rugby (@SuperRugbyNZ) February 22, 2019


But the Reds had their own luck with a forward pass to even the score just before the break.

An early second half mistake allowed the Highlanders to employ their lineout drive again and in the resulting play close to the line, Frizell cleared the ball from a first ruck and then acted as halfback to get the ball and score his second of the night.

When back on attack, the Highlanders saw a turnover when second five-eighths Tei Walden was hit hard in a tackle and the ball was toed downfield with Hegarty getting a key touch. The Highlanders Tevita Li and Ioane were unable to contain the ball and Korovi broke and while tackled slipped the pass to lock Izack Rodda who score.

The Reds maintained the pressure and got back on the Highlanders line when Ben Smith made an uncharacteristic mistake when attempting to keep the ball in play. He put his foot on the line as he batted it back infield, and the Reds were quick to seize their chance with some great driving play at the line.

When prop Faeo Fotuaika got the ball close to the line there was no stopping him and his try gave his side a 31-29 lead.

A @Highlanders win and the return of @BanksMarty to #SuperRugby ? 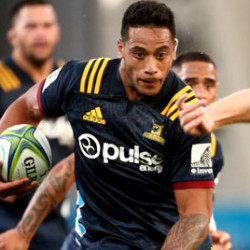