Hirini leads the way to winning start in Sydney 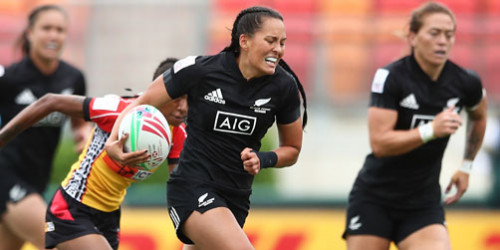 Captain Sarah Hirini pronounced before the tournament that she was fit to go and she demonstrated that superbly in the Black Ferns Sevens unbeaten first day at the Sydney leg of the HSBC Women's World Series on Friday.

Showing no signs of the injury which curtailed her appearance at Hamilton last week Hirini thrived as New Zealand beat Papua New Guinea in their opening game 38-5, France 31-7 and England 29-0 to round out the first two day.

Hirini was a livewire, leading from the front throughout the three games, providing thrust and momentum just when required while flinging some accurate dive passes in the win over England, the ground being affected by rain that fell earlier.

QUICK TAP: WOMEN IN RUGBY MAKING AN IMPACTThe win over England was emphatic and resulted in some good play in tight situations. That was clear in the first try when Tyla Nathan-Wong broke the England defensive impasse by resorting to a kick ahead. She stayed in front of England's defenders, toed the ball on and then gathered it before getting a pass to Niall Williams who was in support.

Gayle Broughton was introduced late in the first half for immediate impact with her goose step and then acceleration into a gap to score.

England had New Zealand pinned on its line for a scrum, but New Zealand cleared the ball with Hirini putting Michaela Blyde into space and she ran nearly 80m to give New Zealand complete control of the game.

See you all tomorrow for our Cup quarterfinal clash with @RugbyCanada ??


Shakira Baker and Alena Saili were both introduced as substitutes and scored a try apiece as New Zealand rounded out their win.

The Black Ferns needed to quell some determined play from Papua New Guinea in the opening 38-5 win. Hirini opened the scoring when stationed wide and was on the end of the line after some strong turnover work achieved by Williams.

However, the moment of the game didn't belong to the Black Ferns. Instead it was 38-year-old PNG flyer Fatima Rama who stole the moment after a stunning break from deep in her own territory. She got the ball in the clear and headed for the goalline with Blyde in pursuit, but the New Zealander's vain dive wasn't enough to halt Rama, mouthguard out of place and being chewed on her run, from scoring.

But it was a momentary hope for PNG as New Zealand ran the ball from the restart with Nathan-Wong using a sidestep to open up a gap in midfield to run 60m to give New Zealand a 12-5 halftime lead.


Williams scored early in the second half on the back of a reverse pass and then replacement Broughton scored after Hirini and Blyde combined to create the chance.

Baker scored almost immediately after taking the field and the game was rounded out when Ruby Tui capitalised on Baker's ability to stay on her feet in the tackle, get the ball clear and provide the scoring chance which Tui took.

France were expected to be a much tougher proposition but lacked poise under the pressure New Zealand. They had a great chance to score from a five-metre scrum on New Zealand's line. But they failed to control the ball and Nathan-Wong was through onto the loose ball in a flash. She raced to halfway and found Hirini in support. She gathered in a wild pass and sent it on to Blyde who raced away to score.

French woman Chloe Pelle unleashed a strong fend on Stacey Waaka to hold her off and race in for France's try to level the scores.

But soon after Anne Cecile Ciofani was sinbinned for a deliberate knock down and New Zealand capitalised. Hirini immediately lifted the tempo and Waaka had the chance to race in and then after the halftime siren sounded replacement Broughton was on hand to take advantage after France conceded successive penalties to score.

Into the second half New Zealand applied defensive pressure through Blyde and Broughton for Nathan Wong to score. Williams was sinbinned for a high tackle but New Zealand's defensive covered her absence and no sooner was she back for the last moments than she took the ball to the line before being tackled. The ball was flicked on to Blyde for the easiest of tries for the 31-7 win.

Nothing beats having family in the stands to support you ??????#Sydney7s pic.twitter.com/vW9UywAQZm— Black Ferns (@BlackFerns) February 1, 2019 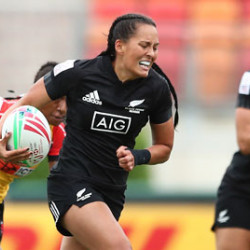 View all
France ready to hit the ground running in the opening game
France, one of the sides considered a potential finalist, is looking to hit the ground running when playing South Africa in Saturday's Rugby World Cup opening game at Eden Park.
Black Ferns named for Rugby World Cup opener
The Black Ferns team to play in their opening match of Rugby World Cup 2021, in front of a record-breaking crowd, has been named.
Referees confirmed for November internationals
Australian referee Nic Berry has been appointed to the England-New Zealand Test at Twickenham on November 19 during the All Blacks northern tour.
Popular Katia brings up century in the Bush
When Inia Katia arrived in Masterton from Fiji more than a decade ago he had little idea he'd emulate his future father in law by playing 100 games for Wairarapa Bush.
Tuitupou hattrick helps sink Lions Under 19
New Zealand Under 19 team have finished their tour of South Africa undefeated after a comprehensive 42-10 victory over the Lions Under 19 side at Emirates Airline Park Stadium, in Johannesburg.
England women draw inspiration from football team
England is the red-hot favourite to win the Women's Rugby World Cup starting in Auckland on Saturday and is drawing inspiration from their football team, who won Euro 2022 earlier this year.
New Zealand Under 19 named for final game in South Africa
The New Zealand Under 19 team has been named to take on the Lions Under 19 side at Emirates Airline Park Stadium in Johannesburg.
Are the days of stifling rush defences limited in rugby?
Encouraging signs have emerged in the early stages of England's Premiership.
Wallaroos undaunted by ‘world record’ Eden Park crowd
Wallaroos captain Shannon Parry is undaunted at taking on the Black Ferns in front of a world-record crowd, at Eden Park, in Saturday's Women's Rugby World Cup pool opener.
Black Ferns In World Cup Openers
The Rugby World Cup starts on Saturday when the Black Ferns tackle Australia at Eden Park.
Jordie Barrett commits to NZR and Hurricanes till the end of 2025
Jordie Barrett has officially put pen-to-paper on a new deal that will keep him in the capital with the Hurricanes and New Zealand Rugby (NZR) through till the end of 2025.
Victoria Grant has Aupiki and the World Cup on her mind
Victoria Grant was a winner throughout her distinguished playing career. The former Black Ferns captain won the World Cup in 2006 and 2010 and was recognised as New Zealand Women's Player of the Year in 2008.
Pollard rates the All Blacks World Cup chances
Support for New Zealand's Rugby World Cup hopes in France next year has come from an unlikely quarter – Springboks' first five-eighths Handré Pollard.
History awaits the Black Ferns at Eden Park
Black Ferns co-captain and first five-eighths Ruahei Demant believes Saturday's Rugby World Cup opening game against Australia will result in emotions she has never experienced before.
LADI6 set to light up Whangārei as part of huge opening weekend
Premier New Zealand female vocalist Ladi6 has been announced to headline match day two of Rugby World Cup 2021 at Northland Events Centre on Sunday 9 October.
Quarterfinalists confirmed in the Bunnings NPC
Canterbury finished as the highest-placed side, losing only once during the competition, while scoring 46 competition points to head the Evens Conference and will host Northland who stormed home against Manawatū with a 41-24 win in Kaikohe.
Playoff picture becomes clearer in Heartland Championship
Bunnings Colin Meads Memorial Trophy semifinalists look set to be South Canterbury, Whanganui, Thames Valley and North Otago with one round of the competition left.
New Zealand Under 19 team edge plucky Leopards
The New Zealand Under 19s (NZ U19s) have made it three from three on their tour of South Africa with a hard fought 42-31 victory over the Leopards in Potchefstroom.
Fa'amausili to be inducted into Hall of Fame
Four-time Women's World Cup winner with the Black Ferns, Fiao'o Fa'amausili, will be inducted into World Rugby's Hall of Fame in November.
Theresa Fitzpatrick thriving on World Cup opportunity
Theresa Fitzpatrick missed the Sevens World Cup in South Africa in September - a major disappointment for an Olympic and Commonwealth Games gold medalist.