History made at 2018 ASB Rugby Awards 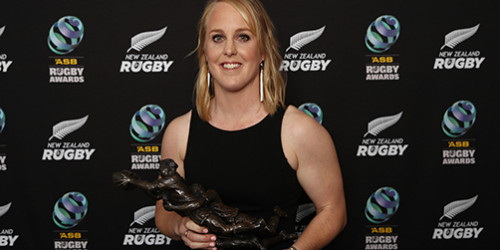 Kendra Cocksedge has been named the Kelvin R Tremain Memorial Player of the Year, the Black Ferns Sevens crowned the adidas New Zealand Team of the Year, and the Crusaders named adidas National Team of the Year, in a history-making ASB Rugby Awards in Auckland tonight.

Cocksedge, a 47-Test cap Black Fern and giant playmaker for the successful back-to-back Farah Palmer Cup champions Canterbury, is the first woman to receive the Kelvin R Tremain Memorial award. In sublime form in 2018, Cocksedge emerged the winner of the prestigious award from a strong field of nominees featuring All Blacks Brodie Retallick, Richie Mo’unga, and Codie Taylor.

QUICK TAP: FAAMAUSILI LEAVES BLACK FERNS IN GREAT SHAPE
She was also named the New Zealand Rugby Women’s Player of the Year – her second time (last in 2015) winning that award - and won the Fiao’o Faamausili Medal for player of the Farah Palmer Cup. The awards cement her status as the most outstanding player in fifteens rugby in New Zealand – male or female – in 2018. She joins an impressive alumnus of previous winners including Sam Whitelock, Beauden Barrett, Ma’a Nonu, Brodie Retallick, Kieran Read and Richie McCaw.

The Black Ferns Sevens were crowned the adidas New Zealand Team of Year – their first time winning the honour after a remarkable year with double-gold at the Commonwealth Games and at the Rugby World Cup 7s.

It was a huge night for the Crusaders whose classy First-Five-Eighth Richie Mo’unga saw off his team mate Matt Todd and the Chiefs’ Solomon Alaimalo to win Investec Super Rugby Player of the Year; Crusaders and All Blacks hooker Codie Taylor was named the Tom French Memorial Maori Player of the Year, and Crusaders and Canterbury lock Luke Romano was awarded the Duane Monkley Medal for player of the Mitre 10 Cup.

???"It's pretty special for myself, my culture and where I'm from" - Codie Taylor reflects on winning the Tom French Memorial Maori Player of the Year! #ASBRugbyAwards pic.twitter.com/TyPMLA8hW4— All Blacks (@AllBlacks) December 13, 2018

New Zealand Rugby’s highest recognition of an outstanding contribution to rugby, the Steinlager Salver, was awarded to All Blacks legend Waka Nathan, who was chosen especially by the New Zealand Rugby Board. The NZRPA David Kirk Award was presented to All Blacks centurion Keven Mealamu and Black Ferns skipper Fiao’o Faamausili for their contributions to the game off the field.

Canterbury’s Tom Christie, who also starred in this year’s New Zealand Under 20 team was New Zealand Age Grade Player, and Brett Ranga from the Meads Cup champions side, Thames Valley, was named the Mitre 10 Heartland Championship Player of the Year.

The accolade that pays tribute to rugby’s tireless volunteers, the Charles Monro Rugby Volunteer of the Year, was this year presented to Horowhenua-Kapiti’s Irene Eruera-Taiapa. A long-serving volunteer with the local rugby union, she is the union’s Respect and Responsibility and Child Protection Advisor and has been a driver of discussion about these topics in the rugby environment.

A try by Chris Hala’ufia from the national First XV champions side, St Peter's College, was voted by the public, as the SKY Fan’s Try of the Year, edging out a star-studded list of tries from All Blacks to Black Ferns, Super Rugby and national provincial competitions.

“It has been a wonderful and successful year right across rugby. It has been another positive year for women’s rugby particularly for the Black Ferns Sevens and their continued dominance on the world stage. Kendra’s award tonight is another remarkable achievement, and her utterly sublime performances in both the Black Ferns and Canterbury jersey have clearly made her a standout individual, and she thoroughly deserves the many accolades she has received.

“Congratulations also to the Crusaders for retaining the Investec Super Rugby title this year. Their dominance in the competition was incredible. It is no small coincidence that Crusaders players also took home the Investec Super Rugby and Tom French Memorial Maori Player of the year awards and their consistent excellence is a credit to their club.”

ASB executive general manager digital data and brand Simon Tong said the awards were a highlight in the rugby year and a chance to recognise the achievements of those in the sport.

“It’s been another successful year for New Zealand rugby, and we are incredibly proud to be a sponsor of these awards,” Tong said.

“On behalf of ASB I would like to congratulate all of this year’s deserving recipients, it’s great to be able to honour the progress and success of the rugby community from the players and teams to the coaches, referees and supporters. These award winners set the bar high in performance, but most of all they inspire and excite the next generation of champions.”

?? Congratulations once more to Kendra Cocksedge, the first ever female to win the Kel Tremain Player of the Year award!#ASBRugbyAwards pic.twitter.com/H14gQDJofv— Black Ferns (@BlackFerns) December 13, 2018

The @BlackFerns Sevens golden year has been capped off by being named the New Zealand Team of the Year!#ASBRugbyAwards pic.twitter.com/C4gmB8PQBX— All Blacks (@AllBlacks) December 13, 2018 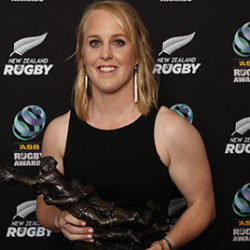