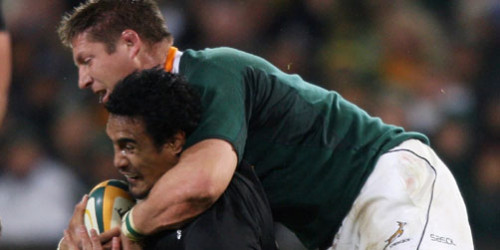 Bakkies Botha revealed that South Africa's victory over the All Blacks in Dunedin during the 2008 Investec Tri Nations has left the Springboks an even more determined bunch ahead of their showdown in Hamilton on Saturday.

The world champions ended a 10-year drought of not beating the All Blacks on their own turf when Ricky Januarie's late try handed them a 30-28 win at Carisbrook - dubbed 'The House of Pain'.

Now the two sides are preparing to meet in what could be another crucial Tri Nations encounter with the visitors, who lost their first game of the competition against Australia at the weekend, still needing a win to secure the title.

Despite having already beaten Graham Henry's men twice earlier in the competition, lock Botha knows that playing New Zealand in Hamilton will be totally different.

"That win in Dunedin last year broke the ice, it's planted a small seed in our minds," he said. "You tell yourself 'you can do it in New Zealand'. At the end whistle in Dunedin, it was such an amazing feeling and the guys want that again.

"We weren't at 100 percent last weekend, if you compare the intensity of Brisbane with the intensity we brought in Perth, then you can see it just wasn't there. But we know what we lacked, and it's a final for me this weekend.

"We know what we have to do, everyone just needs to buy in now, and then we need to go and produce the goods in Hamilton.

"We all know we can seal the Tri Nations, but the main goal for the team is to focus on what we need to do and back our systems."

Since those back-to-back defeats in Bloemfontein and Durban, the hosts have had time to regroup with a win over the Wallabies in Sydney, followed by a three-week break.

Botha, who will win his 63rd cap at the Waikato Stadium, continued: "Playing at Hamilton, at home, in front of their own crowd, they're going to be more up for it.

"They've had three weeks off and the time to get together and refocus.

"Tests against the All Blacks are always a tough task and if we're not at 100 percent, then it's going to be a long day for us."

Coach Peter de Villiers has delayed naming his team for the game after injuries hit the squad in the form of Bryan Habana and Pierre Spies.

Winger Habana had to be taken off the field before half-time in Brisbane due to a hamstring injury, while number eight Spies picked up a groin problem.

The Springboks have already lost lock Andries Bekker and winger JP Pietersen during the tour. 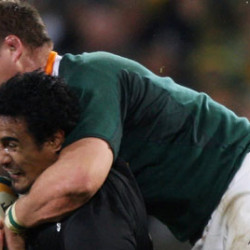