Record equaling Test try scorer wing Doug Howlett is expecting no special favours in his quest to claim the record for himself.

Howlett crossed the goalline three times in New Zealand's 76-14 win over Italy in its opening World Cup game in Marseille to tie with Christian Cullen on 46 Test tries.

However, with the pressure on from the other wings in the side, Joe Rokocoko and Sitiveni Sivivatu, Howlett was aware that nothing could be taken for granted.

"There's a few guys who didn't get on the field today who would like to get on next week and they're just excited but if the opportunity comes I will take it," he said.

"I played alongside Cully, and he was a fantastic player. It was great to play alongside him but to finally get the record represents seven years in the All Black jersey and a lot of hard work."

Howlett said there was a chance he could score more during the game.

"You never know in games like that all you can do is control what you do when you get the ball. I was sniffing around towards the end but if I get another opportunity later on in the tournament I hope to add to it."

He added that it was also nice to achieve the record, his third significant record this year after also taking the Super rugby record, and the Auckland tryscoring record, because this will be last few games in the All Blacks jersey.

It says it all for long service really. It's been a long time coming but after seven years in the All Blacks jersey it is quite good to have something to show for it.

His first try, New Zealand's third, came in the 11th minute after a break on the other side of the field by left wing Sivivatu and a good piece of tidying work by fullback Leon MacDonald who gathered a long pass that went to ground and fed for Howlett to step inside his marker and score.

The second came after 55 minutes, and more tidying work by MacDonald and with Howlett supporting him the chance was created.

Three minutes later he benefited after a Jerry Collins tap kick provided a chance for five-eighths Luke McAlister to slip a kick through for Howlett to run onto the ball.

Backs coach Wayne Smith said Howlett's effort made him entitled to a share of the record.

Howlett had worked hard at his game and had been playing for a number of years. He chased and harried opponents and a share of the record was good reward for him, Smith said.

The manner of the All Blacks win, against an opponent expected to present a stiff challenge, was surprising but as Howlett said: "Preparation has been going on since the beginning of the year but to finally sink our teeth into something was quite satisfying.

The conditions proved a boon.

"It's been a long time since we played in conditions like that at 1.45 with the sun on our backs it was quite exciting." 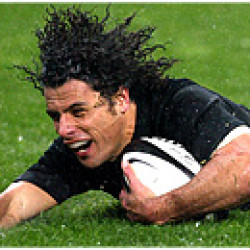