Aiming to continue to establish a fortress at Westpac Stadium, the Hurricanes are wanting to make Friday's Investec Super Rugby game against the Highlanders their 12th consecutive win at the ground.

Coach John Plumtree said they wanted to extend their record to as many as possible and to make the ground a tough place for outsiders to come and win.

QUICK TAP: CRUSADERS EXPECT CHIEFS TO BE FIRED UP
Their quest on Friday would be helped by having all their All Blacks back on deck, although the same also applied to the Highlanders.

Chase Tiatia has been given a second start at fullback with Jordie Barrett starting on the right wing.

Plumtree said he was very happy with Tiatia's performance against the Brumbies in Palmerston North last week.

"Not only was his kicking game good which we were hoping, and that his left foot would be an asset to us, we were hoping he was going to be tough in contact and he was. He carried back well and he counter-attacked, so it was a good night for him," he said.

With Barrett and Ben Lam on the wings and with Beauden Barrett's ability to cover back, there was plenty of scope to deal with any kicking game that the Highlanders looked to employ.

Another who has retained a place in the side is Du Plessis Kirifi who will play at openside flanker with Ardie Savea at No.8. That was partly due to Gareth Evans' calf injury that will keep him out for at least two weeks, but also due to Kirifi's play.

"I was really happy with Du Plessis' game, he was hard on the ball, he complemented Ardie's game really well which was what we were hoping would happen as it frees up Ardie to do other stuff so it is quite a combination," he said.

Savea's speed gave him the ability to get around a defender and it could free him up at the breakdown for poaching opportunities as he wasn't always the first tackler in so there were some technical things that we quite nice for him, he said.

The Highlanders were an outstanding attacking team who played hard for each other, games against them were always tough and Friday's game would be another.

"They showed a lot of character coming from behind against the Chiefs in Hamilton and hung on against a real, tough Reds side and then at the weekend they didn't have a full-strength side. These games can go either way so we respect that," he said. 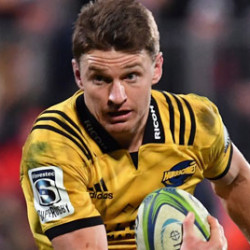