Searching for a level of quality that has so far proved elusive in the Investec Super Rugby season to date, the Hurricanes are looking to the excitement of playing at home to be a motivating factor against the Chiefs on Saturday at Westpac Stadium.

Coach John Plumtree said: "We're not happy with the way our rugby is going at the moment.

QUICK TAP: SUPER RUGBY 'SALUTE TO SERVICE' ROUND
"We're happy with some of it, but not happy with a lot of it and we've been working real hard to improve our game during the week…just trying to finish off some of those opportunities that we're creating, and trying to create more opportunities as well.

"We're not quite there yet, but we still think that we'll get there and hopefully it will be this weekend. But we know that the Chiefs are a tough proposition. They'll be disappointed with what happened to them last weekend at home and that will only add fuel to their fire.

"We know how physical this game going to be," he said.

The defence against the Chiefs was always on red alert because of their off-loading ability from anywhere and they were ambitious with what they did on attack and when they had the ball they were excited. On defence the Hurricanes knew they would have to step up from where they had been.

Jordie Barrett, back after a week off along with first five-eighths Beauden Barrett and flanker Ardie Savea, has been given a start at fullback with Chase Tiatia on the wing.

"It wasn't a difficult decision really. He [Barrett] clearly prefers 15 and midfield rather than wing, so with Ben Lam struggling, we'll put Chase there, he's played on the wing many times," Plumtree said.

Lam suffered a calf strain against the Sunwolves and hadn't been able to train at full speed.

"We've been happy with Chase at fullback and his left foot brings another dimension to the game as well in terms of our exiting and our kicking game as well," he said.

Plumtree did say that it was difficult to put a date on when hooker Dane Coles would be back. Because of his importance to New Zealand and the World Cup campaign they were being cautious with his return. It was frustrating for both the Hurricanes and Coles but it was important that they erred on the side of caution.

Coles' absence has allowed Asafo Aumua to have a start against the Chiefs. While he was still finding his way in Super Rugby, he had been getting time off the bench and was learning all the time. He had played well when getting on against the Sunwolves and management had always targeted a big game for him to start at home in front of his family and friends and Saturday would be exciting for him.

"He can go into it confidently because we have schooled him up for this moment," he said.

"We're talking about some different techniques that he's going to have to incorporate to make sure he looks after his body slightly better than he does, especially around the contact area.

"I mean anything can happen. He hasn't progressed his contact work yet, so once we get into that and see how he copes with that and gets more confident with that, then we can start looking at a date [to return]. It's a slow process and it's hard for me to answer that question accurately," he said.

Remember to watch all the action live this weekend so you can pick your form #SuperRugbyXV team of the week! Every entry goes in the draw to win a Super Rugby jersey! 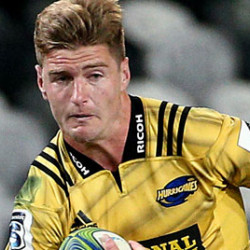