Rocking the Chiefs early, the Hurricanes unleashed some outstanding attacking play to run up a record-breaking bonus point 47–19 win at Westpac Stadium in Wellington on Saturday.

It broke a sequence of games decided by eight points or less between the sides as the Hurricanes scored their highest win, and most tries, against the Chiefs.

QUICK TAP: CRUSADERS V LIONS HIGHLIGHTS Initially, it was Jordie Barrett revelling in his return to fullback who ran in two tries in the first six minutes, but as the game developed flanker Ardie Savea took control and it was his try in the 55th minute which halted the Chiefs' chances of a comeback.

The Chiefs had been hot on attack, but Savea won a crucial turnover and set halfback TJ Perenara loose on a blindside run. He found Jordie Barrett in support on the left flank and when he was tackled by one of the Chiefs' best, second five-eighths Anton Lienert-Brown, Savea was waiting inside for the ball.

He took it, headed out and then cut back in to put his leg drive to use in getting over the line.

There was still time for Beauden Barrett, who landed six conversions in difficult conditions, to get into the action when kicking wide, seeing the ball placed in a tackle by replacement Stephen Donald but he had no support. Barrett toed the ball ahead and the Chiefs were caught in their in-goal area.

There was time for wing Salesi Rayasi to get onto the field for his debut, and from the five-metre scrum, the Hurricanes worked the ball infield before replacement halfback Richard Judd took the ball back to the short side where Rayasi got over for a try seconds after running onto the field.

Jordie Barrett's first try came after both wings, Wes Goosen on the right, and Chase Tiatia on the left, had come off their wings to take short passes and charge ahead.

From the ruck after Goosen's sortie, hooker Asafo Aumua at first receiver slipped the ball inside to a flying Barrett and he charged into space to cross after three minutes.

Then three minutes later Goosen fielded an attempted clearing kick by Chiefs first five-eighths Marty McKenzie and flung it infield to Barrett, who ghosted across field, and then slipped through weak defence from the Chiefs outside backs to score his second.

Goosen was in the action again as the Hurricanes attacked from a Jordie Barrett blindside incursion and a head high tackle was ruled on the wing. The Hurricanes opted for the kick to the Chiefs corner and from the lineout, Aumua took the ball close to the line and lock Kane Laupepe was on hand to drive over in the 16th minute.

Possession began to go the Chiefs' way and their forwards made the Hurricanes pack work with some consistent driving play. They won a penalty five metres from the home team's line and while pressure from the Hurricanes almost disintegrated the Chiefs pack, they somehow secured the ball to move it left, and then back to the right where flanker Luke Jacobson got over the line in the 23rd movement.

Want to see more of this from the Barrett brothers? Tune into @skysportnz right now!#HURvCHI pic.twitter.com/gX3DQRORaO— Super Rugby (@SuperRugbyNZ) April 27, 2019


Straight back on attack five minutes later, the Chiefs launched a lineout drive which crept across field before the ball was taken to the line in a strong run by halfback Te Toiroa Tahuriorangi, who got a late start to the game when Brad Weber withdrew, and from the back wing Ataata Moeakiola was ruled to have grounded the ball by the TMO.

But the Hurricanes responded from the restart by getting the ball to the outside where flanker Vaea Fifita made good ground before linking with centre Matt Proctor who passed to Tiatia who then worked the ball back for Perenara. He was caught in a tackle but retained his feet to get over the line and in a wrestling contest he was ruled to have got the ball down.

The second half saw no lessening in pace, or power, as the Chiefs unleashed a big scrum which allowed them to set up play with McKenzie chipping into space for Lienert-Brown to win the bounce and carry play forward. When the ball was moved from the ruck, No.8 Tyler Ardron and prop Angus Ta'avao passed out to flanker Lachlan Boshier who sold the dummy to cut in for the try.

The Hurricanes changed their front row and had immediate effect with replacement prop Jeff Toomaga-Allen running onto uncontrolled Chiefs lineout ball to carry play forward. The Hurricanes almost had Jordie Barrett over again but a five-metre scrum was ruled. At it Tahuriorangi deliberately knocked the ball down and the Hurricanes packed again and this time Jordie Barrett cleared the ball wide for Goosen, who had enough time, and room, to run around fullback Solomon Alaimalo to score.

FT | ?? What a statement from @Hurricanesrugby! Who was your man of the match? #HURvCHI pic.twitter.com/enRzmJoP7V— Super Rugby (@SuperRugbyNZ) April 27, 2019 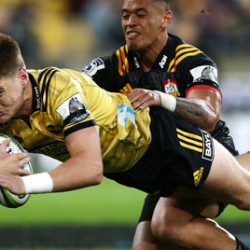