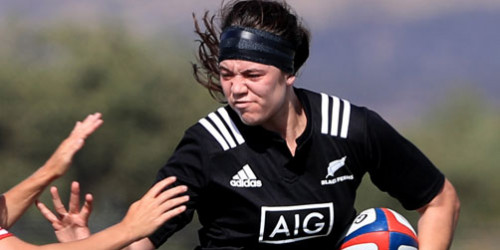 New Zealand's Black Ferns retained their world No.
1 status when beating England 28–10 in their best performance to win the Women's Rugby Super Series in San Diego on Monday (NZT).

Beaten by France in their last outing, the New Zealanders demonstrated the benefit of a week's preparation to show superior fitness in the second and fourth quarters of the game against an England team that looked to stretch New Zealand out wide.

But the Black Ferns were composed, even in the face of two yellow cards in the game, with wing Renee Wickliffe scoring a hat-trick of tries, and brilliantly led in the loose by the find of the tournament, flanker Pia Tapsell, who had great support from No.8 Charmaine McMenamin and captain and openside flanker Les Elder.

Tapsell was dynamic throughout, taking ball up, making key tackles, contesting breakdowns and even competing for, and winning, lineout ball. McMenamin was strong with ball in hand while Elder was ever-present in support.

It was a much more impressive Black Ferns effort with halfback Kendra Cocksedge supplementing the side's try-scoring with her outstanding goal-kicking. It was her sniping run that led to the side's first try.

Kelly Brazier was used at fullback with effect while second five-eighths Chelsea Alley took one key gap which set up Wickliffe's second try.

New Zealand's tight five also deserved credit for sticking to their task and retaining form in the face of England's best efforts to contain them. Left wing Ayesha Leti-l'iga didn't get the same chances on her flank but with strong running and impressive spot tackling she still made a strong contribution.

England started with an up tempo game which caught prop Toka Natua by surprise when a tap penalty out from the line by halfback Leanne Riley saw her impeded in the red zone and Natua was sin-binned. England landed the penalty goal.

But New Zealand made light of Natua's absence to pressure England's line and gained a penalty which Cocksedge goaled to level the scores.

England overthrew a lineout in the 10th minute at New Zealand's 22m line but prop Sarah Bern recovered and ran hard to gain ground and when the ball was moved through the backline centre Emily Scarratt held on to score out wide and convert her own try.


New Zealand's forwards began to unsettle the English with Tapsell twice featuring in set up play as they took the ball into England's 22m. Then Cocksedge took advantage and ran quick ball from the base, stepping her way across the field past four defenders before finding McMenamin in support and her pass give Wickliffe the try in the corner after 25 minutes.

Four minutes later Alley blew the England defence apart with a superb midfield run. Her long pass to the wing went to ground, but backwards. England gained the ball in a turnover. They attempted to run the ball clear but Wickliffe picked off an intercept and ran in the try.

England drew closer to 13-15 when landing a penalty in the 46th minute and while New Zealand lost hooker Te Kura Ngata-Aerrengemate to the sinbin two minutes later, they were able to prevent England scoring.

Cocksedge edged the Black Ferns back to a five-point advantage with a 59th penalty goal, but it was from a scrum in the 64th minute that they secured their winning advantage.

Replacement back Theresa Fitzpatrick raced outside first five-eighths Rua Demant to take a perfectly-timed pass to break through, and have Wickliffe at her side to take the pass and run in for the try.

FT | And that's the game!! The Black Ferns win the #SuperSeries2019 and in doing so retain their World number one ranking!!?? 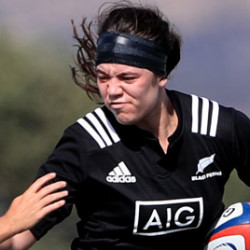