Injury concerns start to mount ahead of World Cup It's the time of year when international coaches start to sweat on any injuries that could involve longer recovery times and Springbok coach Rassie Erasmus has been finding that recently.

With the Rugby World Cup countdown heading towards 100 days out, New Zealand have already suffered the loss of livewire utility back Damian McKenzie.

QUICK TAP: CRUSADERS A GAUGE FOR SA HOPES
But at the weekend Erasmus saw South Africa's player of the year last year flanker Pieter-Steph du Toit leave the field with a shoulder injury in the Stormers' 24-23 win over the Bulls at Newlands.

It wasn't immediately clear how bad the injury was but it highlighted the concerns for coaches as the Investec Super Rugby season builds towards its most crucial stage with the competitiveness increasing and putting more pressure on players.

Another injury in the same game was suffered by Bulls centre Jesse Kriel, another Springbok certainty, who left the field with a lower leg injury.

Adding to the concerns was the inability of Lions captain and No.8 Warren Whiteley to take the field against the Crusaders in Christchurch. A player who has been bedevilled by injuries in recent seasons, the knee injury that kept him from the Crusaders game was a new injury and again its severity has not been disclosed.

You've seen all the tries. You've watched all the action. Now it's time to select your form #SuperRugbyXV team of the week.

While the Springboks have adequate back-up at No.8 with Duane Vermeulen on hand, Whiteley's leadership is regarded as essential for their side.

Similar concerns have been seen in Australia where Brumbies loose forward David Pocock has been able to play only 138 minutes of Super Rugby this year. He returned home early from the Brumbies tour of South Africa and Argentina as a precaution and it was anticipated he would be available for this weekend's home game with the Blues.

Having suffered with a lingering neck injury during the latter stages of 2018, he had concussion issues earlier this year and has been troubled by a calf injury.

Would you pick him in your form #SuperRugbyXV of the week? Let us know by picking your form XV ?? https://t.co/8YShltuDVw pic.twitter.com/0tcRoYu68e— Super Rugby (@SuperRugbyNZ) April 28, 2019 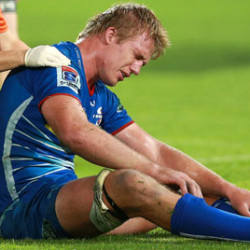