The Six Nations will head to the wire and is set to be decided early this Sunday morning NZT.

After four rounds, on 16 points and leading the pack is Wales, undefeated after an inconsistent 18-11 win over Scotland at Murrayfield, but now confident of a third Grand Slam under Warren Gatland. Victory at the Principality Stadium will be enough.

QUICK TAP: SUPER RUGBY REVIEW-ROUND FOUR
Gatland’s men will welcome Ireland, which gave its best display of the Championship in dispatching France 26-14, a bonus point scoreline that flattered the French. Ireland is on 14 points.

In second position, on 15 points, is England, which hammered hapless Italy 57-14. England hosts Scotland in the Calcutta Cup in the final game and will know at kickoff what it must do to clinch the title, or indeed if there is any hope. Eddie Jones’ charges have, in fact, played the best rugby of the Six Nations, but will rue that second half against Wales.

Wales retained the Doddie Weir Cup with a gritty second half defensive effort after leading 15-6 at the break. Kiwi Hadleigh Parkes, who was bruised and bloody, led the way, as did the pack. But it was two first stanza strikes, by left wing Josh Adams, continuing his fine form, and centre Jonathan Davies, that sealed it for the visitors.

Scotland hacked away and never gave up, finishing with a decimated backline, but the try to left wing Darcy Graham, from a superb scrum move, was all it could tangibly show for the endeavour.

Wales now has 13 straight wins and is poised to emulate the feats of the 2008 and 2012 Grand Slammers under Gatland.

England’s power and pace game was in full evidence as it thrashed the Azzurri, whose porous defence belies the fact they are such a difficult customer at home.

Right wing Joe Cokanasiga impressed with his pace and aerial skill, while centre Manu Tuilagi, who scored a brace, was nigh on unstoppable. Brad Shields notched a double, too, and was full value in the No 6 jersey. Jones was able to empty his bench a long way out from no-side.

Despite having Sergio Parisse back in harness, Italy looked toothless, but did score two nice tries. All to no avail.

?? The #GuinnessSixNations table with Super Saturday on the way. Who's looking forward to a huge final day? pic.twitter.com/XUUdxt0U45— Guinness Six Nations (@SixNationsRugby) March 10, 2019

The return to form of Johnny Sexton was the most telling feature of Ireland’s shutout of France in Dublin. The No 10, reigning World Rugby player of the year, scored a sweet try from a set-piece move, aided and abetted by centre Garry Ringrose, also in top form. Sexton also kicked three conversions and controlled play to good effect.

Ireland was in the ascendant from the kickoff thanks to a second minute Rory Best from a lineout drove. But Joe Schmidt’s men were frustrated at not being able to convert their scrum dominance into more points. CJ Stander was outstanding at No 8, as were lock James Ryan and prop Tadgh Furlong.

France took too many poor options on attack, but did score two late consolation tries. However, there will be little more than pride riding on its final clash against Italy in Rome this weekend.

STORY | Coming from obscurity, Karl Tu'inukuafe has been named as one of New Zealand's five players of the year by the esteemed New Zealand Rugby Almanack. 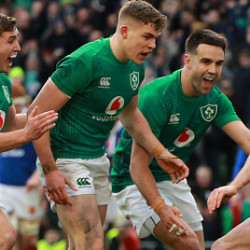 View all
Barrett eager to make an impact in six jersey
All Black Scott Barrett has been given the task of generating drive from blindside flanker in Saturday's first Steinlager Series Test against Ireland at Eden Park.
All Blacks Podcast Powered by SAP with Roger Tuivasa-Sheck, Finlay Christie and Stephen Perofeta
Strap on your headphones for another entertaining episode of the All Blacks Podcast Powered by SAP.
New Zealand Under 20s named to face Fiji
The New Zealand Under 20s will kick off the Oceania Rugby Under 20 Championship this evening on the Sunshine Coast.
Old rivalries set to ignite at Eden Park
Old rivalries will be at the heart of Saturday's first Steinlager Series Test between New Zealand and Ireland at Eden Park.
PREVIEW: All Blacks v Ireland (Eden Park)
The All Blacks open their 2022 Test campaign with a clash against an Irish team who have developed into one of the fiercest rivals of the men in black over the past decade.
Foster looking forward to re-joining the team
All Blacks coach Ian Foster expects to be back at the helm of the side for
Saturday's first Steinlager Series Test at Eden Park.

All Blacks XV Northern Tour announced
New Zealand Rugby’s (NZR) newest Team in Black, the All Blacks XV, will embark on a 3-week global tour playing in North America, the UK and Europe. Matches against Canada and the Barbarians have been confirmed, with two additional high profile matches to be announced soon.
Broadcast Guide: All Blacks v Ireland Steinlager Series
International Rugby has kicked off with the Māori All Blacks defeating Ireland in their opening game of their 2022 tour in Hamilton. The first Test of the Steinlager Series at Eden Park kicks off on Saturday night.
100 Days to go until Rugby World Cup & public tickets on sale
With 100 days to go, rugby fans from all over the world can now buy their tickets to rugby's much anticipated ‘family reunion’ at Rugby World Cup 2021 in New Zealand.
All Blacks wing Leicester Fainga’anuku to debut against Ireland
Head Coach Ian Foster said the selectors were excited to name the first All Blacks test team for 2022.
Ireland take lessons from Māori All Blacks clash
Sitting watching their less experienced teammates lose 17-32 to the Māori All Blacks in Hamilton on Wednesday, Ireland's Test team were reminded of the need for discipline when meeting the All Blacks in the first Steinlager Series Test in Auckland on Saturday.
Strong first half propels Māori All Blacks to victory
The Māori All Blacks have taken yet another international scalp after downing Ireland 32-17 in Hamilton to open the inbound tour.
Perofeta celebrates outstanding season with contract extension
Blues fans will be able to watch new-found favourite, Stephen Perofeta for at least another two years.
PREVIEW: Oceania Rugby Under 20 Championship (2022)
The Oceania Rugby Under 20 Championship kicks off on the Sunshine Coast on Friday. It’s the first time since June 2019 the New Zealand Under 20s have played an official international rugby fixture.
Rugby Sevens teams named for Commonwealth Games
The 26-rugby sevens athletes making up the men’s and women's squads for the Birmingham Commonwealth Games have been announced today in Mt Maunganui.
Bunnings Rugby Assist 2022 commits to improving clubs for the women’s game
Community rugby clubs across Aotearoa once again have the chance to apply for Bunnings Rugby Assist as applications open today.
Cane looks at positives ahead of first Ireland Test
Accentuating the positive in the face of Covid's intrusion into their preparations has been the mantra for the All Blacks ahead of Saturday's first Steinlager Series Test against Ireland at Eden Park.
Māori All Blacks matches crucial for Ireland's development - Farrell
Ireland's tour of New Zealand kicks off in Hamilton on Wednesday when playing the first of two games against the Māori All Blacks, games that are crucial to longer-term Irish hopes.
Hawke's Bay kick off Ranfurly Shield season against South Canterbury in Napier
The storied history of the Ranfurly Shield will begin another chapter when Hawke’s Bay defend the famous log ‘o wood for the first time in 2022 against South Canterbury at McLean Park in Napier.
PREVIEW: Māori All Blacks v Ireland (Hamilton)
It’s hard to know how this one will pan out, given Ireland will still be shrugging off jet lag from their long-haul travel last week while the Māori All Blacks are back in harness for the first game since the two internationals against Manu Samoa in 2021.