Take a trip down memory lane, as we have a look back on Israel Dagg’s incredible All Blacks career.

Sound Debut
Israel Jamahl Akuhata Dagg made his All Blacks debut on 12 June 2010 against Ireland in New Plymouth at aged 22. He started at fullback, with Cory Jane and Joe Rokocoko on the wing. Dagg shared his debutant honors alongside second five-eighth Benson Stanley and prop Ben Franks. Dagg made significant contributions and was rampant on the counter-attack, with the All Blacks coming away with a convincing 66-28 win.

QUICK TAP: TRIBUTES FLOW AS ISRAEL DAGG HANGS UP HIS BOOTS
Tremendous Try
Dagg’s first Test try was one to remember. It came against the Springboks in Wellington on 17 July 2010. He was injected into the Test match in the 63rd minute, replacing Rene Ranger and it resulted in a remarkable individual try. It began with his trademark goose step, he then proceeded to beat five defenders, including experienced loose forwards Pierre Spies and Schalk Burger to score in the left-hand corner. Dagg’s superb try contributed to the All Blacks 31-17 victory.

World Cup 2011
Dagg was a stand out at the 2011 Rugby World Cup. He scored five tries, including two each against Tonga and France in pool play. He started at fullback in that memorable final against France at Eden Park. After 24 years without the Cup, the pressure was certainly on the All Blacks at home in front of a crowd of more than 60,000. Dagg and New Zealand’s threatening backline didn’t get a lot of ball in the 8-7 triumph, with the forwards called upon to do a lot of the work up front. However, it was still an unforgettable moment for Dagg, and certainly a career highlight.

Resurgence in 2016
Dagg’s 2015 season was rocked by several niggling injuries, which forced him to miss selection for RWC 2015. Then while playing for Hawke’s Bay in the National Provincial Championship, he dislocated his shoulder and required a major operation. His shoulder injury kept him off the field for a lengthy period. But, Dagg returned to Super Rugby with the Crusaders in 2016 and had a blinder season. He earned an All Blacks recall for the Steinlager Series against Wales, where he opened the scoring in his first match back in a 36-22 win at Westpac Stadium. Dagg then backed up his Wellington performance, with another dazzling display in Dunedin. He showed his pace in an 82nd minute length-of-the-field try.

Final Outing
Towards the end of Dagg’s All Blacks career, the Hawke’s Bay and Crusaders fullback slotted onto the wing. He played 13 of his 66 Test matches in the number 14 jersey. Yarrow Stadium ended up being the venue where Dagg started and finished his All Blacks journey. He started on the right wing in his last Test match on 9 September 2017, in a 39-22 winning performance against Argentina. Dagg went onto score in his final match, picking up a difficult pass from Sonny Bill Williams, stepping two defenders to cross the line. 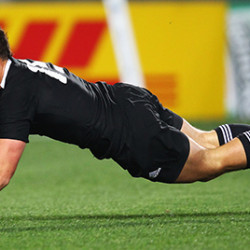 View all
England women draw inspiration from football team
England is the red-hot favourite to win the Women's Rugby World Cup starting in Auckland on Saturday and is drawing inspiration from their football team, who won Euro 2022 earlier this year.
New Zealand Under 19 named for final game in South Africa
The New Zealand Under 19 team has been named to take on the Lions Under 19 side at Emirates Airline Park Stadium in Johannesburg.
Are the days of stifling rush defences limited in rugby?
Encouraging signs have emerged in the early stages of England's Premiership.
Wallaroos undaunted by ‘world record’ Eden Park crowd
Wallaroos captain Shannon Parry is undaunted at taking on the Black Ferns in front of a world-record crowd, at Eden Park, in Saturday's Women's Rugby World Cup pool opener.
Black Ferns In World Cup Openers
The Rugby World Cup starts on Saturday when the Black Ferns tackle Australia at Eden Park.
Jordie Barrett commits to NZR and Hurricanes till the end of 2025
Jordie Barrett has officially put pen-to-paper on a new deal that will keep him in the capital with the Hurricanes and New Zealand Rugby (NZR) through till the end of 2025.
Victoria Grant has Aupiki and the World Cup on her mind
Victoria Grant was a winner throughout her distinguished playing career. The former Black Ferns captain won the World Cup in 2006 and 2010 and was recognised as New Zealand Women's Player of the Year in 2008.
Pollard rates the All Blacks World Cup chances
Support for New Zealand's Rugby World Cup hopes in France next year has come from an unlikely quarter – Springboks' first five-eighths Handré Pollard.
History awaits the Black Ferns at Eden Park
Black Ferns co-captain and first five-eighths Ruahei Demant believes Saturday's Rugby World Cup opening game against Australia will result in emotions she has never experienced before.
LADI6 set to light up Whangārei as part of huge opening weekend
Premier New Zealand female vocalist Ladi6 has been announced to headline match day two of Rugby World Cup 2021 at Northland Events Centre on Sunday 9 October.
Quarterfinalists confirmed in the Bunnings NPC
Canterbury finished as the highest-placed side, losing only once during the competition, while scoring 46 competition points to head the Evens Conference and will host Northland who stormed home against Manawatū with a 41-24 win in Kaikohe.
Playoff picture becomes clearer in Heartland Championship
Bunnings Colin Meads Memorial Trophy semifinalists look set to be South Canterbury, Whanganui, Thames Valley and North Otago with one round of the competition left.
New Zealand Under 19 team edge plucky Leopards
The New Zealand Under 19s (NZ U19s) have made it three from three on their tour of South Africa with a hard fought 42-31 victory over the Leopards in Potchefstroom.
Fa'amausili to be inducted into Hall of Fame
Four-time Women's World Cup winner with the Black Ferns, Fiao'o Fa'amausili, will be inducted into World Rugby's Hall of Fame in November.
Theresa Fitzpatrick thriving on World Cup opportunity
Theresa Fitzpatrick missed the Sevens World Cup in South Africa in September - a major disappointment for an Olympic and Commonwealth Games gold medalist.
It all comes down to the final round of the Bunnings NPC
It all comes down to the final round of the regular season with playoff spots yet to be decided in both the Odds and Evens conference of the Bunnings NPC.
World record crowd on track for Rugby World Cup opener
Rugby World Cup 2021 fever is sweeping New Zealand with over 30,000 tickets already snapped up for the opening day at Eden Park on 8 October and sales on track to set a new attendance record for a women’s Rugby World Cup match day.
All Blacks re-discover ‘their old magic’ - Barnes
New Zealand may have won the Lipovitan-D Rugby Championship, but British critic Stuart Barnes doesn't think that will cause too many concerns among northern hemisphere powerhouses.
South Canterbury reaching unparalleled heights in 2022
South Canterbury is unbeaten in 20 consecutive matches which is more than double their previous best unbeaten streak of eight a row achieved twice in 2013-14 and 2015.
New Zealand Under 19 team named take on the Leopards
The New Zealand Under 19 team will take on the Leopards Under 19 side at Olen Park Stadium in Potchefstroom.