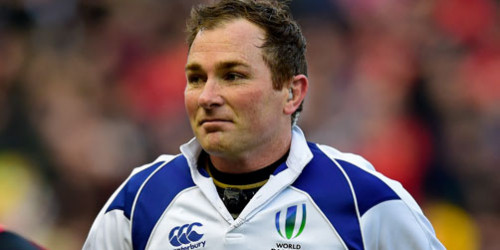 New Zealand will have Glen Jackson and Chris Pollock refereeing in the Rugby World Cup later this year.

They have been named on the 12-member panel who will referee games in the event while Mike Fraser is on the seven-man panel of assistant referees and Ben Skeen on the four-man panel of television match officials.

A review of refereeing performances by an official selection committee of John Jeffrey (chairman), Lyndon Bray, Andrew Cole, Donal Courtney, Clayton Thomas and Joel Jutge was behind the selection.

The chairman of the selection panel, John Jeffrey said: "Since Rugby World Cup 2011, we have been focused on developing a strong panel that can preside over the 48 matches at this year's tournament. The fact that seven of the referee panel were involved in the 2011 tournament points to the big-match experience that they hold. Between the 12 of them, they have refereed no fewer than 361 internationals."

Decisions on the referees to be included are based on the reviews and assessment of all Test match performances. This includes self-assessment by the officials themselves as well as independent assessors, coaches and members of the selection panel.

Constant physical monitoring and assessment is an important part of the process with physical performance crucial to maintaining the highest possible standards.

As well, match date from all games is loaded into an internet-based performance analysis system and the information is made available to referees and their conditioning coaches.