The next wave of New Zealand Sevens talent will embark on a tour of Japan this month with the All Blacks Sevens Development and Black Ferns Sevens Development teams preparing for international rugby.
The All Blacks Sevens Development team is:
Losi Filipo - Wellington
Dan Fransen - Canterbury
Taylor Haugh - Otago
Jacob Kneepkens - Taranaki
Peni Lasaqa - Bay of Plenty
James Little - North Harbour
Josh Moorby - Waikato
Curtis Reid - North Harbour
Adam Simpson - Wellington
Te Puoho Stephens - Tasman
Te Rangatira Waitokia - Manawatu
William Warbrick - Bay of Plenty
The Black Ferns Sevens Development team is:
Kendall Buckingham - Canterbury
Amy du Plessis - Otago
Dhys Faleafaga - Wellington
Tynealle Fitzgerald - Bay of Plenty
Tysha Ikenasio - Auckland
Isla Norman-Bell - Auckland
Rina Paraone - Waikato
Mererangi Paul - Bay of Plenty
Cheyelle Robins-Reti - Waikato
Kennedy Simon - Auckland
Grace Steinmetz - Canterbury
Kiki Tahere - Bay of Plenty
Kalyn Takitimu-Cook - Manawatu
On the back of their respective trials last month, the teams will assemble this weekend to travel to Okinawa, Japan for matches against the Japanese national sevens teams.
New Zealand Rugby Sevens Development Manager Chad Tuoro said the development programmes are a crucial part of the national sevens structure.
“Our development programmes are promoting players into the professional sevens environment and it's vital to have that next tier of players ready to step up into the World Series.
“Being able to give these players international experience is an incredible opportunity and going to Okinawa gives us a look at where our sevens teams will be based for the Olympic Games."
Players were selected to trial from their performances at Red Bull Ignite7 and or the National Sevens at the end of last year. Of the six Red Bull Ignite7 MVPs, William Warbrick, Jacob Kneepkens, Kalyn Takitimu-Cook, Mererangi Paul and Isla Norman-Bell have made the national development teams.
The development teams are set to play five matches across two days against the Japanese men’s and women’s teams.
The Black Ferns Sevens Development team is coached by Jimmy Sinclair and Victoria Grant. After playing in Japan they will also take part in an invitational tournament in Auckland in March. The team features Crystal Mayes and Cheyelle Robins-Reti who have previously played for the Black Ferns Sevens.
The All Blacks Sevens Development team is coached by Peter Nock and Johnny Weston. Taylor Haugh, who made his All Blacks Sevens debut in Cape Town in December, is named in the 12, and newly contracted player Niko Jones will also travel with the team. Wellington’s Losi Filipo earns a remarkable elevation into the development side, after outstanding performances at the National Sevens and subsequent national trial.
“We know these players have been working incredibly hard to earn their place in this side, and some of them had choices to play elsewhere. This tournament allows us to test these athletes and their ability to perform under the pressures of an international sevens tournament," said Tuoro.
New Zealand Rugby Chief Rugby Officer Nigel Cass congratulated those selected in the development squads.
“This is an exciting time for all these players. We know that sevens is an increasingly popular form of the game for young athletes and it is growing in popularity around the world.
“This next tier of players have an important part to play in our High Performance programme as we look to the Olympics and beyond. These players have all worked hard for their selection, and it’s an exciting opportunity to test them at an international level.”
Nicki Nicol, who leads New Zealand Rugby’s Respect and Inclusion program, said Filipo’s selection was approved by NZR, and came more than three years after he began a rehabilitation programme.
“He has shown remorse, commitment and determination to make positive changes and rugby continues to play an influential role in Losi’s life. NZR does not condone violence and is actively investing in programmes that support safer communities.”

WRAP | It was a historic day for Tasman men at the @NationalSevens while Manawatu continued their dominance in the women's competition. 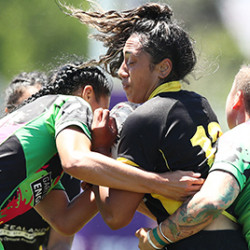