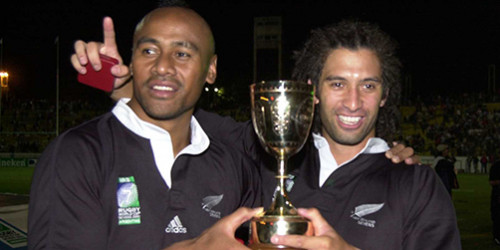 As a Commonwealth Games gold medallist in 2002, captain of New Zealand’s victorious 2001 Rugby World Cup sevens team and scorer of over 100 tries for the side, Te Nana has featured in many of New Zealand’s great moments and played alongside some of the biggest names in the game.

QUICK TAP: 19 PLAYERS TO WATCH IN 2019
Te Nana has taken a look back at his career and time in the commentary booth to select this ultimate team of New Zealand sevens stars.

“Get Jonah anywhere near the knockout stages of a tournament and he would take over. Our school of thought was that ‘Joe’ would either score two tries or create two tries, in finals football that’s money in the bank. He launched himself at the Hong Kong Sevens when he was a kid just out of school and the rest was history.”

Eric Rush (C)
“Rushy is the Godfather of sevens in New Zealand and right next to Waisale Serevi as the greatest players to have played the game. The secret with Rushy was his ability to make players follow him and lift them a level above what they thought was possible. We played teams that were probably physically or talent-wise better than us but Rushy got us to a point that we wanted to excel above that. We were the most mentally-tough team on the circuit and a lot of that had to do with his leadership.”

DJ Forbes
“This was a tough pick between Dallas Seymour and DJ Forbes. Both players are awesome over the ball, carry well, defend strongly and work tirelessly. But I went with DJ because he had a little more speed. In the game of sevens you need that gas and DJ showed it in his prime. You need a player to do the dirty work and DJ was a monster over the ball. Someone that gave 100 percent to the black jersey every moment he was on the field.”

?? Check out Scott Curry's favourite moment from last year's #nzsevens in Hamilton. How epic was this? You won't want to miss in 2019, make sure you join us on the 26th of January! ?? pic.twitter.com/FwMkhhEe6s— HSBC NZ Sevens (@NZ_Sevens) January 13, 2019

“Amasio was a guy that could control the game no matter where he was on the field. His mind was sharp and he was the only guy I saw who could unsettle Waisale Serevi. For me that spoke volumes of how good he was. I never seen a guy control not only a game but a tournament like Amasio could. He could rip teams up when he wanted to but it was his game management that gets him selected in the playmakers role for this team.”

Tomasi Cama
Well I couldn’t pick myself for this position so I’ve gone for Tomasi Cama at first five! He wasn’t far behind Amasio in terms of his ability to control a game but probably had a little more edge and pace. He was a genuine game breaker and fearless competitor too. Now as a coach with the All Blacks Sevens team we are seeing that fighting spirit come out with the team and he is a key part of their recent success.”

Christian Cullen
“Cully is someone that launched his career in Hong Kong and loved the game of sevens. His skills speak for themselves and you couldn’t match him one-on-one. The thing is with him and Jonah is that you can’t stop them, all you can do is try to limit their touches. They are going to have an impact somewhere and that’s just how good they are. Cully is a non-negotiable selection in my line up.

Brad Fleming
“Brad’s one of the only guys I’ve seen with genuine express speed in the All Blacks Sevens. We’ve gone with plenty of big and fast players over the years but Brad had Olympic-level gas. When you’ve got a guy with extreme pace on the edge it opens up the rest of the field. Even though Brad was not the biggest player on the field he was quite strong and a great sweeper on defence too. He was a big part of the All Blacks Sevens success back when I was running around and I haven’t seen pace like him since.”

??? STATCHAT | Since 1999, @fijirugby and the @AllBlacks7s have played each other 97 times on the @WorldRugby7s circuit with 50 and 47 wins respectively. Will this great rivalry continue in Hamilton? pic.twitter.com/ANHaulH9Yn— HSBC NZ Sevens (@NZ_Sevens) January 15, 2019 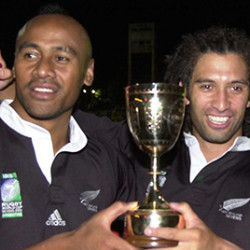