Key players re-commit to All Blacks Sevens through to 2020 The All Blacks Sevens have secured the services of Regan Ware, Sione Molia and Vilimoni Koroi through to the 2020 Toyko Olympics.

They join co-captains Scott Curry and Tim Mikkelson along with Joe Webber in forming the core of the All Blacks Sevens squad for the next two seasons.

All Blacks Sevens Coach Clark Laidlaw said it was great to have Ware, Molia and Koroi locked in for another two years. All three are currently playing in the Mitre 10 Cup.
QUICK TAP: REBECCA MAHONEY SET TO MAKE NZ RUGBY HISTORY
“We are really confident in the group we are putting together.

“Regan and Sione are similar in the sense they have been two of our most consistent players over the past 12 months and both of them are only getting better.

“Regan has matured into a great professional rugby player and he is reaping the benefits on the field from the hard work he is putting in off the field,” said Laidlaw.

“Sione had a stand out season and has developed into a strong leader within our team. He has the ability to play several positions and really stepped up at the big tournaments this year,”

20-year-old Vilimoni Koroi has shown plenty of potential in the black jersey since debuting in his first year out of school and Laidlaw said he is set for a big future.

“It’s there for everybody to see how good he can be. His vision, game awareness and genuine pace combine to make a real point of difference. He has a lot of growing to do, people forget how young he is, but having him commit to sevens and being able to really develop his technical and tactical skills is exciting.”

Kurt Baker, Trael Joass, Andrew Knewstubb and Jona Nareki, who were all part of the World Cup winning team in July, have signed to the All Blacks Sevens for the 2019 season.

“That highlights the balance we are trying to create, experience with players like Kurt and Trael and then young exciting talents like Andrew and Jona who proved this year they can play well in big tournaments.”

The World Cup winning squad will be in Wellington this week, alongside their Black Ferns Sevens counterparts, to be acknowledged for their 2018 achievements at the All Blacks v South Africa Test match.

The #BlackFerns7s are coming to Hamilton for the 2019 @NZ_Sevens ?? 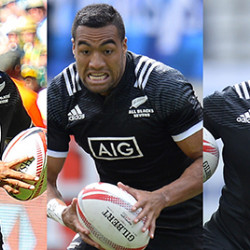