Kiwis lining up in northern hemisphere

Justin Marshall's Ospreys team is still alive in its hopes of making the play-offs rounds of the Heineken Cup after a hard-fought 22-22 draw with Stade Francais at Swansea.


In a game which featured only a try apiece, it took a late penalty goal by Lionel Beauxis to keep the French team in touch, while Ospreys nearly snatched a victory when Gavin Henson's desperate dropped goal attempt from a long distance just drifted wide.

Stade Francais is assured of winning the group if achieving a bonus point win over Italian side Calvisano next weekend, but the Ospreys, if able to repeat their earlier win over Sale, would qualify second in the group.

James Hook secured that earlier win with a last-minute conversion, and was prominent in this weekend's win when landing a conversion for wing Nikki Walker's try and five penalty goals.

The Ospreys side suffered a blow when flanker Filo Tiatia limped out of the game injured after only three minutes.

Defending champion Munster left Christian Cullen on the bench but managed a 30-27 win over a game Bourgoin team in a game played at Stade de Geneve in Switzerland.

Munster leads its pool and needs only to be Leicester next weekend to secure its own quarter-finals place.

And while Cullen was not required, former Hurricanes centre Lifeimi Mafi chose a fine time to score his first Heinken Cup try, 66 minutes into the game to give the side a boost at a vital stage.

Bryce Williams was back at lock for Bourgoin which suffered its fourth loss in the competition.

Already secure in the quarter-finals are the Llanelli Scarlets who beat Ulster 35-11 in their game. Former All Blacks centre Regan King, who along with Deacon Manu are the New Zealanders in the side, was in the try-scoring action for Llanelli which continued to move the ball despite poor conditions.

Paul Steinmetz landed a penalty goal for the Ulster side which is now out of a quarter-finals chance.

Leicester warmed up for its key game with Munster by thrashing Xavier Rush's Cardiff team 34-0.

Former All Blacks three-quarter Daryl Gibson was one of six Leicester players to touch down for tries during the game.

Northampton's game against the Border Reivers had to be transferred due to a waterlogged field in Galashiels and was played at Murrayfield instead.

Northampton won the game 29-19 with first five-eighthsCarlos Spencer landing three conversions and a penalty goal. Northampton is second in its group. 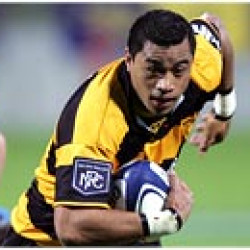